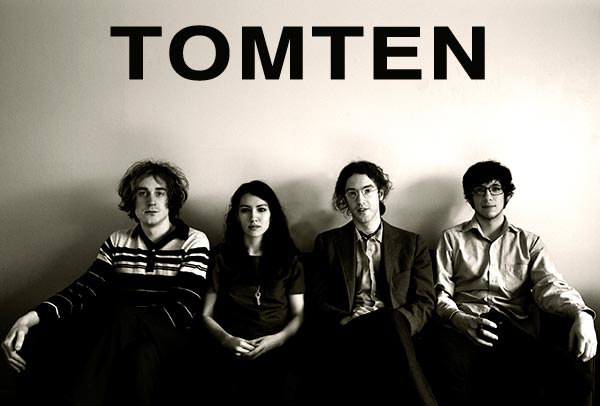 The songs on Tomten’s 2012 releases, the Ta Ta Dana EP (due in April) and album Wednesday’s Children (June) feature a keen sense of assured swing with a suavely subversive passion. Fans of dream pop factories like Papercuts, dark maestros like early solo John Cale, or chanteuse-chasers like Serge Gainsbourg will happily sip the band’s musical “Brandy like it’s candy” (to borrow a line from their delicately lusty, intoxicating “Lofty” on the full-length). Singer/keyboardist Brian Noyeswatkins grew up in lovely Carmel, California and you can feel the distant sun on a cool fall day in his songs, and hear the swell of an emotional ocean in the briny waves of baroque pop he creates with his band. He met fellow singer/songwriter-bassist Lena Simon on orientation day at a multi-arts college in Seattle, where drummer Jake Brady was enlisted as well. The speed of their coming together to play songs, borrowing gear and rehearsal space from the academy, and causing sweet commotion at local venues was stolen-race-car fast. They do know how to play, but that’s not really the point. Tomten has gotten a lot of praise for Brian’s finesse on Rhodes, Mellotron, Hammond, and piano; Lena also plays bass in buzzed trance-choral band Pollens; and Jake nimbly sets all that gorgeousness up. But contrary to some generous but misdirected reports, the sublime pleasures of the group come from their private and passionate investigations for deep cuts on LPs across several decades, with a shared love for all things Big Star, Elliott Smith’s XO and Either/Or, Bowie’s Hunky Dory, T. Rex’s Electric Warrior, John Cale’s Vintage Violence and Paris 1919–and, yes, The Beatles (there, someone said it). Tomten has played many much-praised live shows at various Pacific Northwest venues and even a set at Bumbershoot 2011, capping off a dazzling previous year of getting airplay and praise before signing to new label Flat Field Records. Upon winning the biggest local battle of the bands competition in Seattle they were invited to play Menningarnott in Reykjavik, Iceland, on a bill for a culture night, and played several shows over a week there. The debut 10” vinyl EP Ta Ta Dana from Flat Field Records is part of a double A-side with the title track and “So So So,” along with two B-sides, “Thwarting The Young” and “It Won’t Escape Me.” The former is their most snarling track, and the emotional inspiration came when Brian wanted to blow up Value Village when he worked there. The narrative describes “a 1950’s Angry Young Man-type, slave to his bloated millipede-like higher-ups, [who] loses a bit of his being each day as he boards the tram. He eventually obliterates himself and the chrome tower in which he works.” Listening over and over to Wednesday’s Children reveals new meanings and sonically sensual pleasures within the playfully bittersweet melodies and brilliantly subversive lyrics. Wednesday’s Children reveals a big bouquet of pert yet shaggy blossoms of mod pop posies sweetly poking you with brandy-tipped thorns. The full length is sequenced marvelously, beginning with the Smile-like gem “Anyone’s Guess,” the tart trying-to-break-your-heart goodbye anthem “Ta Ta Dana,” and the dead-end street foggy notions of the title track. That’s just the first three songs, and don’t think about stopping before you get to Lena’s darling, droll, cosmopolitan self-mythology on “So So So” halfway through Side Two. The final flow of the album has the spiritual expansiveness of the third Velvet Underground LP or the end of a brittle portrait of an emotional Dorian Gray, as the glistening self-jibes of anthem “Jujube” and the stately, ruminative, near six minutes of final track “Rhododendron” finish the listener off.
SIMILAR ARTISTS