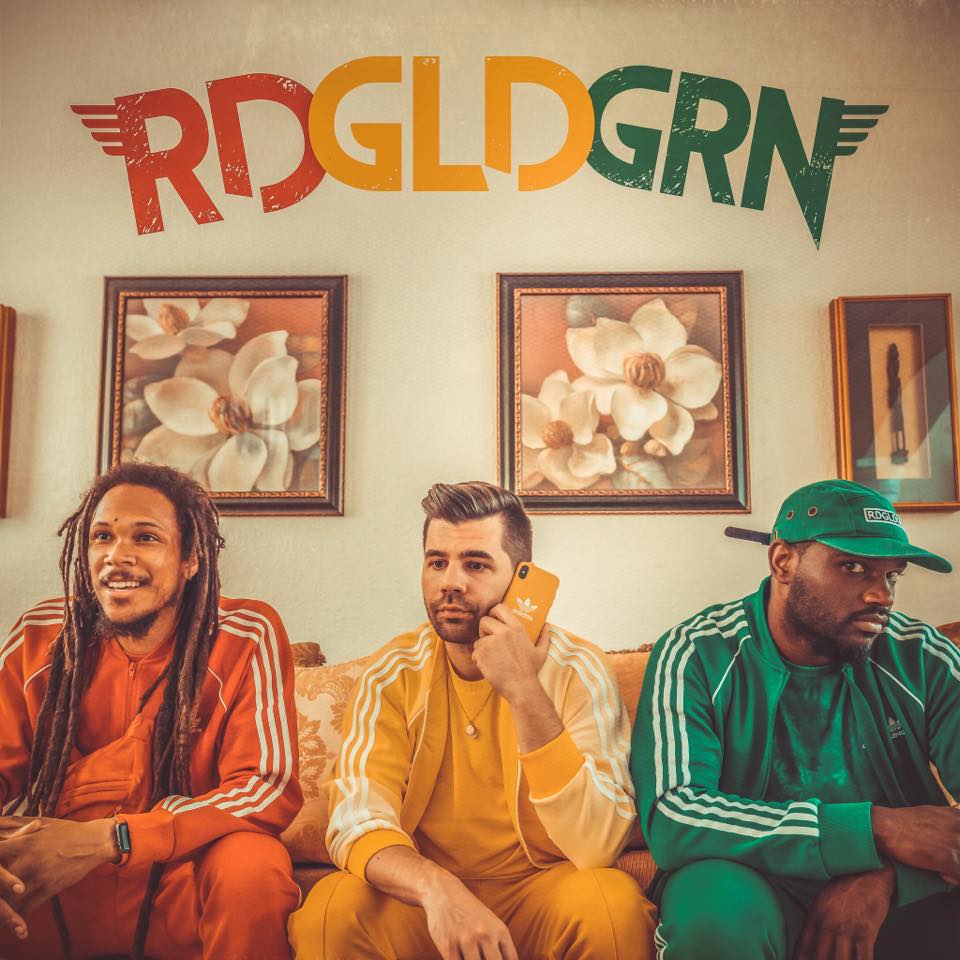 With a distinctive Go-Go drumbeat native to Washington D.C. serving as the backbone, RDGLDGRN (pronounced RDGLDGRN) takes hip-hop infused punk and indie rock and forges a new sound that is both deeply rooted in DC’s sonic landscape, and transcends it. Comprised of three members who identify as Red, Gold, and Green, RDGLDGRN began making music in their basement studio, drawing from a diverse pool of influences like Bob Marley, The Beatles, Chuck Brown, Vampire Weekend, Outkast, The Neptunes, and Bad Brains. The result, as HipHopDX put it, is band that melds both rap and rock “without falling short of either.” RDGLDGRN initially gained widespread recognition after self-releasing the song, “I Love Lamp,” on YouTube, amassing over 100,000 views over just a few weeks and winning the attention of notable industry figures and tastemakers, including renowned producer Kevin Augunas, who signed the group to Fairfax Recordings and produced their debut album. Recording that album would find them collaborating at length Dave Grohl, who not only shares a hometown with the group, but who decades before had recorded “Nevermind” with Nirvana in the same Sound City Studio where he would provide the drums for the entire RDGLDGRN LP. The band also collaborated with the legendary genre-bending artist, producer, and designer, Pharrell Williams, who co-wrote and co-produced the standout track “Doing the Most,” which showcases the breadth of the group’s capabilities and their willingness to defy convention. Along the way, RDGLDGRN have established themselves as a must-see live act, delivering eclectic and high-energy performances alongside Outkast, The Killers, Talib Kweli, 311 and AWOLNation. They’ve performed across the United States and Europe, playing the Irving Plaza in NYC, El Rey Theater in Los Angeles, Merriwether Post Pavilion in Maryland, Alexandra Palace in London, and Berlin Arena in Germany, as well as selling out U-Street Music Hall in front of their hometown DC crowd. RDGLDGRN’s upcoming album promises an evolution in their sound as the group suffuses its genre-bending musicality with a sly wit, honesty, and truly global worldview. With their first single, “No Pixar,” RDGLDGRN confronts the trials of forging their own path and establishing their own sense of identity and morality—a move that not only has The Source calling RDGLDGRN “the rap game’s Disney,” but signals the band’s willingness to step into the void. Not content to be the product of their myriad influences, RDGLDGRN continues to stake their claim as the new musical vanguard.
SIMILAR ARTISTS