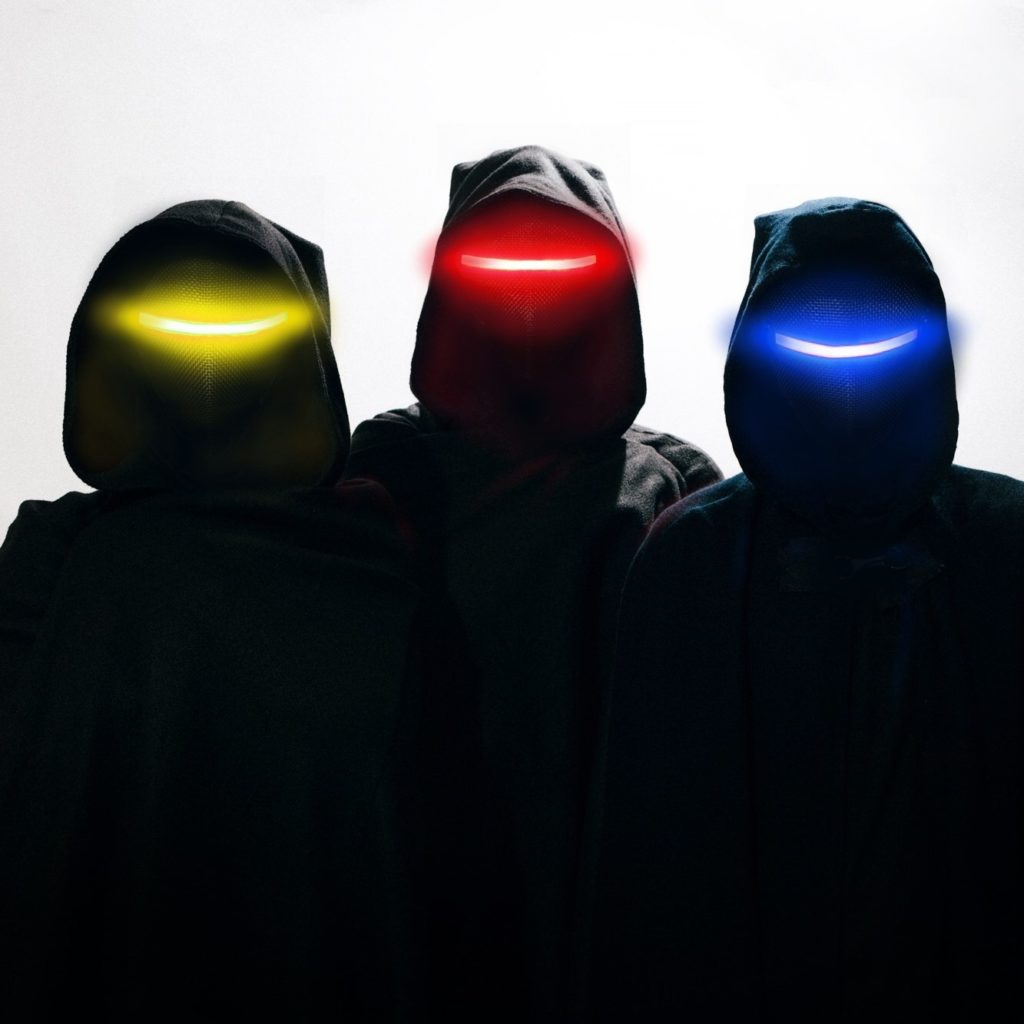 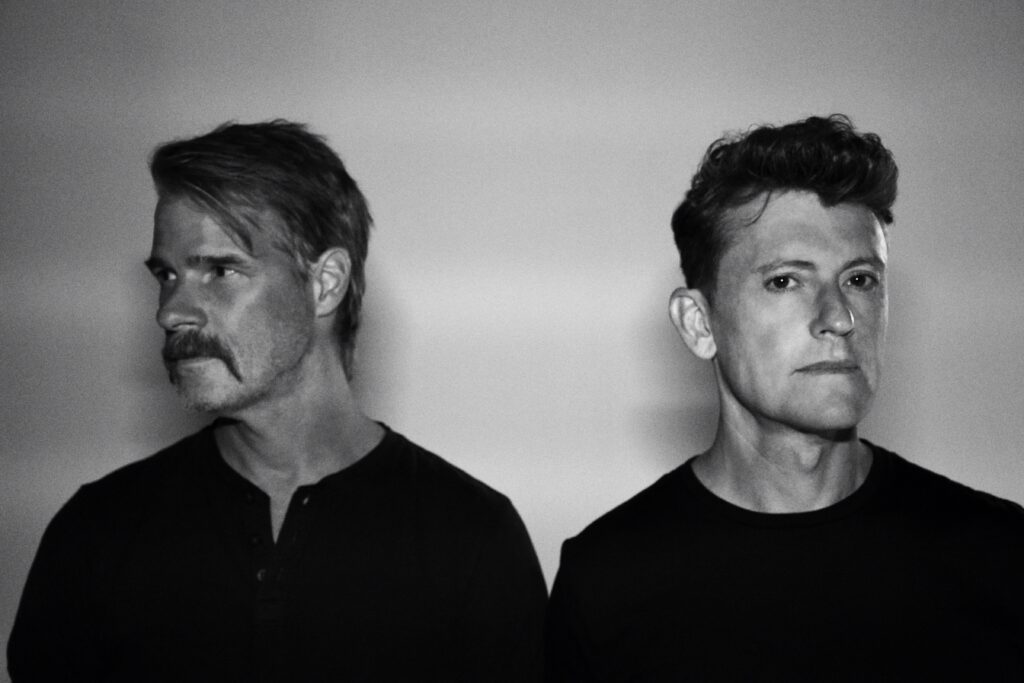 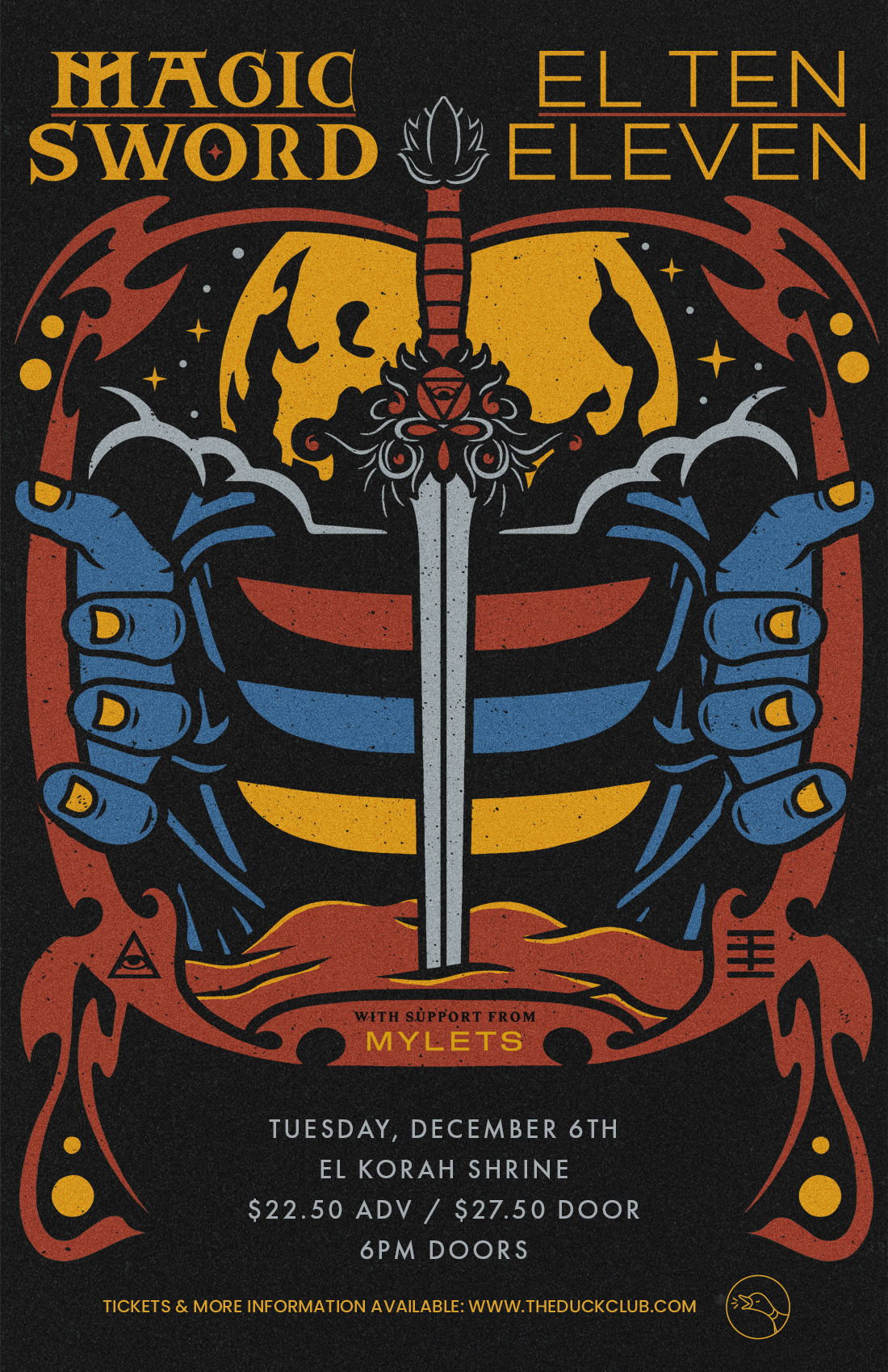 Magic Sword is an ageless tale of good and evil told through an ever expanding graphic novel with each volume accompanied by an original, synth-heavy soundtrack as well as immersive live performances. With the three mediums intertwined from conception, together they create an epic experience for those bold enough to bear witness and come away with a deeper understanding of the ultimate hero’s journey. Armed with a musical and visual aesthetic that has its roots unabashedly buried deep in the golden era of ‘70s and ‘80s fantasy and sci-fi, Magic Sword’s followers are called to another plane of existence where the struggle between light and shadow becomes all too real. The multiverse has aligned to bring the people of the land together for the birth of their album Endless, followed by a tour of the realm searching for the greater good.

The Immortals are:
The Keeper of the Magic Sword – red, keyboards
The Seer of All Truths – blue, guitar
The Weaver of all Hearts and Souls – yellow, drums

The Immortals give a direct account of their vision:

“In the beginning there was light… and darkness. A creation of perfect balance. As time passed, evil spread over the land like a plague, slowly consuming everything in its path. In the final moments before light was lost to the shadow for all time, a weapon of infinite power was created, the Magic Sword. Thus, restoring balance to the universe.

The genesis of things are often small. As the single seed grows to a mighty oak, so too did the path of the Keeper begin as a single choice in an age long past. Once a humble king, they were manipulated into unknowingly unleashing the Dark One. All of reality was torn asunder as the Lord of Shadow was released from their ancient prison, having been bound only by the power contained within the Magic Sword. From that day forth, the King was cursed to be the immortal Keeper of this powerful key. He has been relentlessly compelled for millennia to find the Chosen One who will one day unleash the true power of the weapon and cannot rest until the grand design is seen complete with the Darkness bound once again.

Little is known of The Lord of Shadow but death and decay. Since the release from his ancient prison by the hapless Keeper of the Magic Sword, he has pulled all of existence slowly toward himself in a vortex of darkness and destruction. Any wayward soul that he touches is corrupted to their ultimate demise. He uses his followers, acolytes of death, with no more regard than any other, for his reason of being is simply to end all things. Ensuingly, the forces of good have been searching for the Light to push him back into his eternal prison. The key to operate this cell is the Magic Sword; when wielded by the Chosen One, it has the power to return balance to the Universe.

The Keeper of the Magic Sword searches endlessly for the Chosen One. With the help of the other Immortals, The Seer of All Things and The Weaver of Hearts and Minds, they are ever trying to stem the tide of the Great Shadow from engulfing all life. Through time and space itself, The Immortals are pulled by the power of the Magic Sword to those who hunger for true justice. Whenever the need is great, they appear with the Magic Sword and a high stakes proposition for those who are pure of heart, perpetually hoping that their search is finally over.

This prophesied being contains the ability to wield the power of the Magic Sword and seal the prison that holds Dark One for all eternity. Only then will The Keeper, The Seer, and The Weaver be able to rest. Until the chosen one is revealed, the search continues in this realm and many others throughout all of time and space. In what form will the Magic Sword manifest? Who is the Chosen One? Will it be you? Answers will reveal themselves as the need arises. A tale of high adventure as old as time itself.”

Struggles are sloshed away by tidal waves of champagne. Resolutions are boldly proclaimed or whispered in one’s own heart. A ball drops, and we expect a whole new life to spring out. But nothing is transformed or transposed, because miracles don’t happen during the hung time between this year and the next. It’s just another New Year’s Eve.

Few days hold as much promise—and subsequent disappointment—as New Year’s Eve. The spiritual hangover that lingers every January 1 inspired the new works from El Ten Eleven. After a year that changed nearly-everything most-likely-forever, the instrumental duo felt compelled to soundtrack the emotional heave-ho of New Year’s Eve with an album of the same name.

“New Year’s Eve is a reference to guarded optimism about what will be happening next year. At the time, it seemed like our national divisiveness might be waning  and the end of the pandemic was near. But of course that’s not how it turned out,” bassist Kristian Dunn said of the album’s inspiration. “That’s what New Year’s Eves are. You think it’s gonna be a fun night, but usually it’s disappointing at the end.”

Over the course of 20 years and 11 albums, El Ten Eleven has continued to redefine the potential of bass guitar and drums. With an arsenal of pedals, labyrinthine arrangements, and a deft use of looping, Kristian Dunn (bass) and Tim Fogarty (drums) create two-man symphonies. With New Year’s Eve, the duo melds electrifying disco grooves with their tried-and-true experimental rock atmospherics.

The album’s eponymous opening track plots the emotional topography of high hopes and sinking disappointment. Beginning with woozy bass drones powered by an Electro-Harmonix Superego Synth Engine (Dunn’s new “secret weapon”), the track eventually swells with Fogarty’s shape-shifting rhythms and lush textures. Followed by the scruffy groove of “Meta Metta” and triumphant crescendo of “Isn’t Everything Enough,” it’s impossible not to feel hope, or something like it.

Throughout its six tracks, New Year’s Eve romps through infectious grooves, Rototom blasts, electrifying breakdowns, and meditative reprieves. Along with the pedal-fueled trickery and musical prowess fans have come to expect from El Ten Eleven, New Year’s Eve channels Dunn’s lifelong love of disco. Channeling memories of a childhood spent spinning Niles Rogers and Chic while his peers blared heavy metal, Dunn imbued his own emotions onto the delightful excess of disco.

“I’m a huge fan of disco music, and I mean that completely sincerely,” Dunn says. “I’m a bass player, so the bass is often the driving lead instrument of disco music, so that appealed to me–that’s just in my blood. This love was always in me, and it was time for it to come out. The album is kinda funky and kinda dancey, but with my sad boy Kristian Dunn crap on top.”

As much as the two-year recording process of New Year’s Eve demanded experimentation, it also required the band to go back to basics. Reuniting with their longtime producer Sonny DiPerri (DIIV, Portugal. The Man), Dunn and Fogarty were encouraged to simplify their approach to composition and embrace their musical instincts.

The album’s cover, a digitally manipulated photo of the duo’s reflection glimmering in fresh rainfall (i.e. a reflection of a reflection), serves as a metaphor for the band’s creative process, a lengthy process of rehearsal, reflection, and revision. Along with nodding to the reflection inherent on New Year’s Eve, the photograph also pays homage to Dunn’s newfound meditation practice, which has allowed him to break free from overanalyzing his life and work.

The album’s closing track, “A Reflection Of A Reflection,” serves as a musical counterpart to this thought-loop. Repetitious to the point of hypnotic, the song’s groove mirrors the enthralling nature of contemplation. Shuffling percussion punctuates a revving bass line, never yielding to the thicket of harmonics and distortion, ultimately leaving the listener with cymbal pops and unquiet minds.

A followup to 2020’s grief-stricken Tautology trilogy, New Year’s Eve marks a joyous new chapter for El Ten Eleven. Instead of trying to double-down on the concept album blueprint, Dunn made a concerted decision to move out of his head and into a more intuitive world.

“With Tautology I had all of these ideas that just kept coming, and I had to figure out how to make them all fit together across three records,” Dunn says of the triple-album’s process. “With New Year’s Eve, I felt more free. I didn’t have to force anything to fit together—it just fell into place.”

Emotional resonance has always trumped musical intrigue for El Ten Eleven. With New Year’s Eve, they’ve created a record that reminds listeners that hope isn’t reserved for just one holiday. Hope is what fuels 20 years and 11 records. Hope is what carries a drum-and-bass duo across stages around the world. Hope is a brazen belief in change, and that lives in every day and everyone.