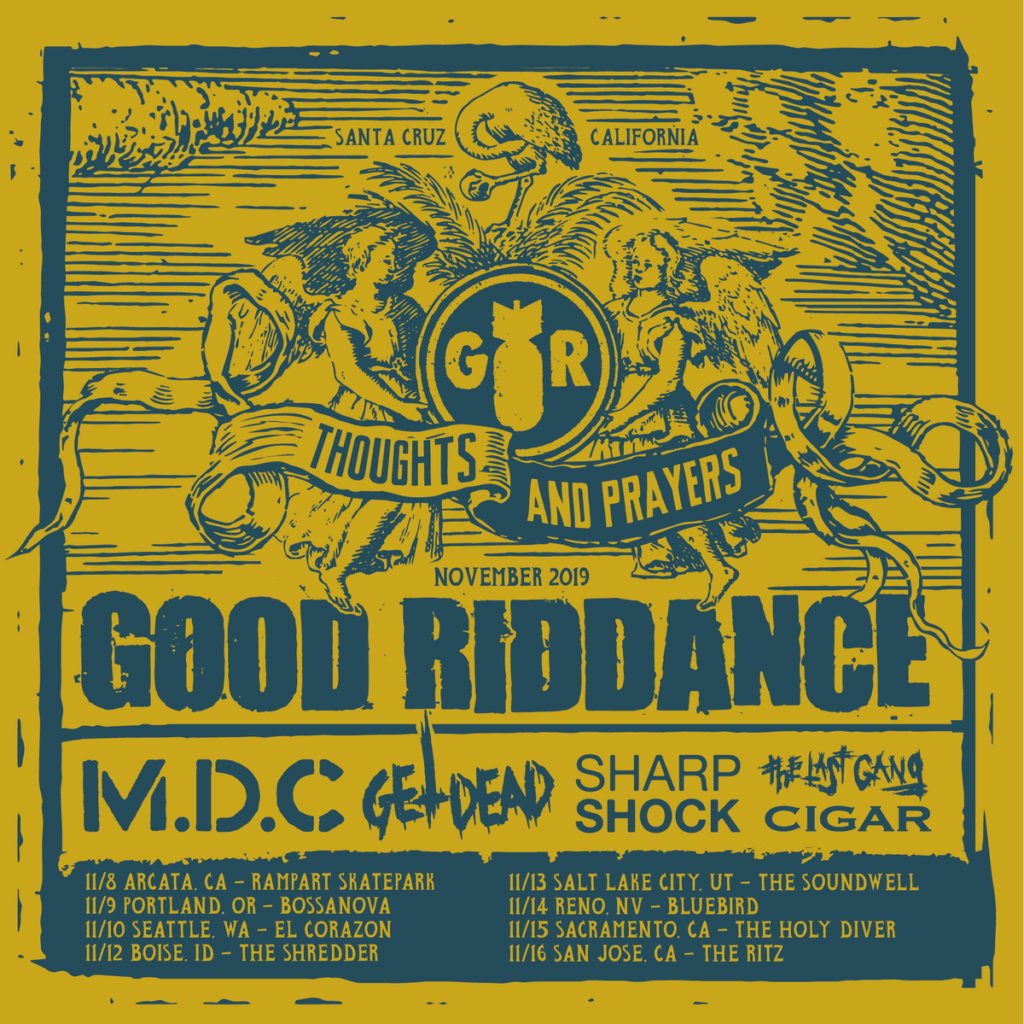 Good Riddance is a hardcore punk band from Santa Cruz, California which was formed in the early 1990s. The band grew out of California’s vibrant surfing and skateboarding culture and was influenced by such bands as Black Flag, The Adolescents, TSOL and Bad Religion as well as East Coast bands like Sick Of It All and the Cro Mags.

The group’s early years were spent going through line up changes, playing local and regional shows and recording demos as they developed their sound. Early tours and a 7” record release on Little Deputy Records in 1993 (“Gidget”) brought the band widespread interest and overwhelmingly positive reviews.

In 1994 the band caught the interest of Fat Wreck Chords who released the “Decoy” 7″ later that year while the band hit the studio with producer Ryan Greene to record their first full length album “For God And Country” which was released in early 1995.

Over the next decade Good Riddance went on to release seven full length albums and an EP for Fat while crisscrossing the globe dozens of times on tour. The band developed a dedicated and passionate fan base through their constant touring and politically charged music. Good Riddance began donating a portion of their record sales to various organizations and doing whatever they could to raise awareness about the causes they felt strongly about.

In May 2007 Good Riddance played their final show, fittingly in their hometown of Santa Cruz. The members then went their separate ways to raise families and pursue careers. Though there have been numerous offers to reform and play in the five years since, the band has turned them all down.

Life gets in the way. That phrase is frequently used as a nicer way of saying, “The dream is dead and there’s nothing I can do about it.” But in the case of Bay Area punk quintet Get Dead, it’s the exact opposite: Had life not repeatedly gotten in the way, they never could have made their eclectic new album Honesty Lives Elsewhere.

“Everyone works and has spouses and kids,” says singer Sam King, who paints houses for a living. “[Overall] we spent a month recording this album, but it was in spurts, because our bosses or our wives would call us and need us to come do something.”

Such is the challenge of recording close to home—sure, you get to sleep in your bed every night, but it’s a lot harder to disconnect from your day-to-day responsibilities to focus on your art. However, King says it worked in the band’s favor, as it gave them more time to spend with the songs, allowing them to be fleshed out in new and different directions.

“We ended up writing about 18 songs for the album; immediately after doing the demos, we scrapped three of them,” King recalls. “We listened to them and were like, ‘Fuck that! We must’ve been drunk.’”

Recorded at San Francisco’s Motor Studios by Josh Garcia (himself a former member of Get Dead), Honesty Lives Elsewhere found itself the benefactor of many of Get Dead’s talented friends and labelmates who stopped by to contribute to the album, including members of Lagwagon, toyGuitar and Old Man Markley. Plus, as with their previous album, 2013’s Bad News, the band enlisted NOFX’s Fat Mike to assist with production and songwriting.

“With lyrics, I’ve always been somebody that sits down and writes a song in a couple hours or else it gets scrapped,” King says. “I’ve never been a journal guy. I don’t have pages and pages of ideas. But Fat Mike came in a couple times and pushed me, like, ‘Hey, maybe you should develop that idea a little more.’ It worked.”

The process of creating Honesty Lives Elsewhere was one with a sudden dark cloud put over it, when one of King’s best friends committed suicide just as the singer was embarking on writing lyrics. “I tried to distance myself from the incident as I was writing the album because I didn’t want it to come across as some morbid ode to him,” he says. “But when the album was done, I listen to it now and it’s all I hear. There was no escaping it. There was no way I was going to write all these songs and nothing was going to be about it, whether I wanted to or not. I don’t want this to be a bummer fuckin’ record, but when I listen to it, I hear a bummer fuckin’ record.”

However, King is of the mindset that songs evolve and lyrics change meaning and intent over time. “It comes from the first time we put out an album and my mom wanted to hear it, and she thought the choruses said something completely different. Her take on it was a completely different thing than what I meant. So I’ve never wanted to post lyrics because [the song’s meaning] should be up to the listener.”
Ever since, King has been focused on pushing Get Dead forward, no matter which direction—amped up or acoustic, poppy or thrashy. In his mind, complacency equals failure.

“Every album, we want to do something different,” the singer explains. “It doesn’t work out that well for us in terms of being put into a genre or niche, but I think in the end, we enjoy the process of making music. If we can come up with something we haven’t done before? Fuck it, let’s do it. If you can tweak it that much where you’re standing out a little bit and making new stuff every time, then you’re winning. 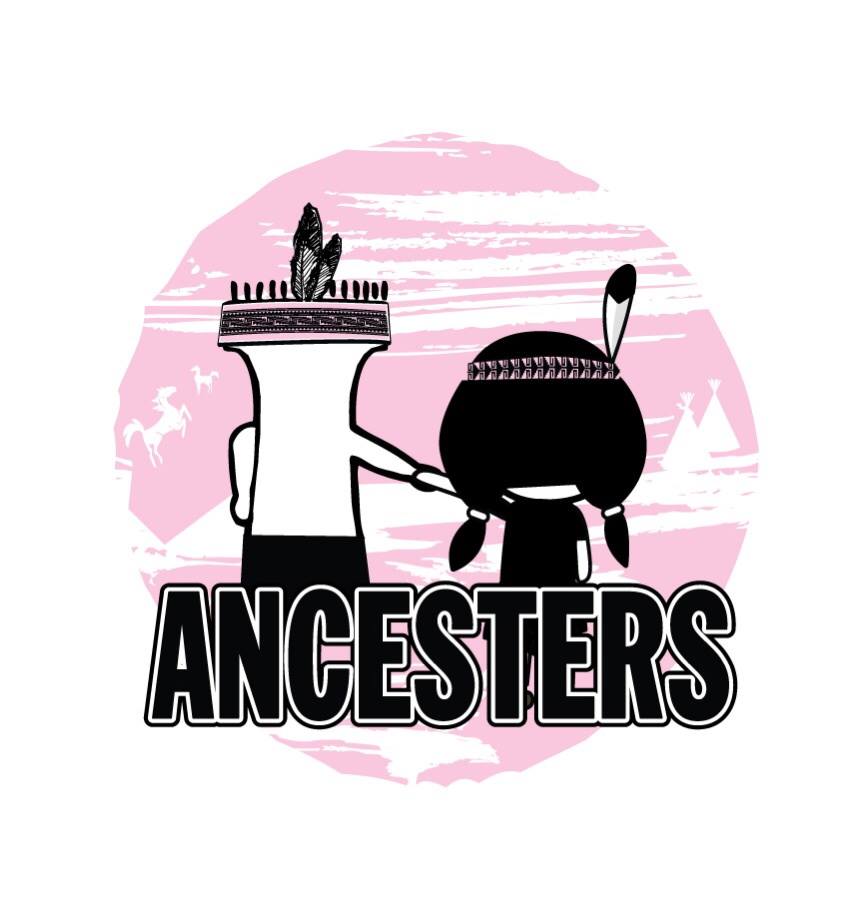 Upinatem formed in Jerome, Idaho in 1995. It was Sean (guitar/vox) and his 2 cousins, Andrew (drums) and John (bass). In 1996 they released their first tape, “Cool People Suck.” Sean then moved to Alberta and the band went on hiatus. He returned to Idaho in ’98 and teamed up w/ John and new members Brady (2nd guit) and Matt (drums). They released the album “Designer Fascist Show” in 2000. After John left, Shannon came in w/ a goddamn fretless bass and the band recorded a demo in 2001 (now known as the self-titled album). Then Shannon and Matt left the band. Pate and Mike were their respective replacements in 2003.

In ’04 Sean, Brady, Pate and Mike released “The Untimely Demise Of A Once Well Read Nation” on Vegas-based Monkey Ass Records. They embarked on their first tour in ’05, hitting Washington, So Cal and Vegas.

After Pate quit in ’06, Sean switched to bass. The power trio of Sean, Brady and Mike recorded the “Democracide” album on Boise-based 1332 Records in 2008. 1332 also released a live Upinatem CD titled “Same Songs Only Shittier.” The live album includes a 2nd guitar played by our pal Kevin who played w/ us off and on from 2005-10 even though he never appeared on a studio album.

In 2010 Russ came in to replace Kevin, resulting in the current lineup of Sean (bass/vox), Brady (guit), Mike (drums/vox) and Russ (guit/vox). In short order they recorded a 5-song demo and hit the road in 2011, playing legit shows in Washington and B.C. In 2015 Upinatem celebrated 20 years of existence with newest and best album “Groundhog Years” released by Wavepop Records. This was followed by a west coast tour in August.

In 2016 Upinatem is somehow still a band! You’ll be hearing from us.