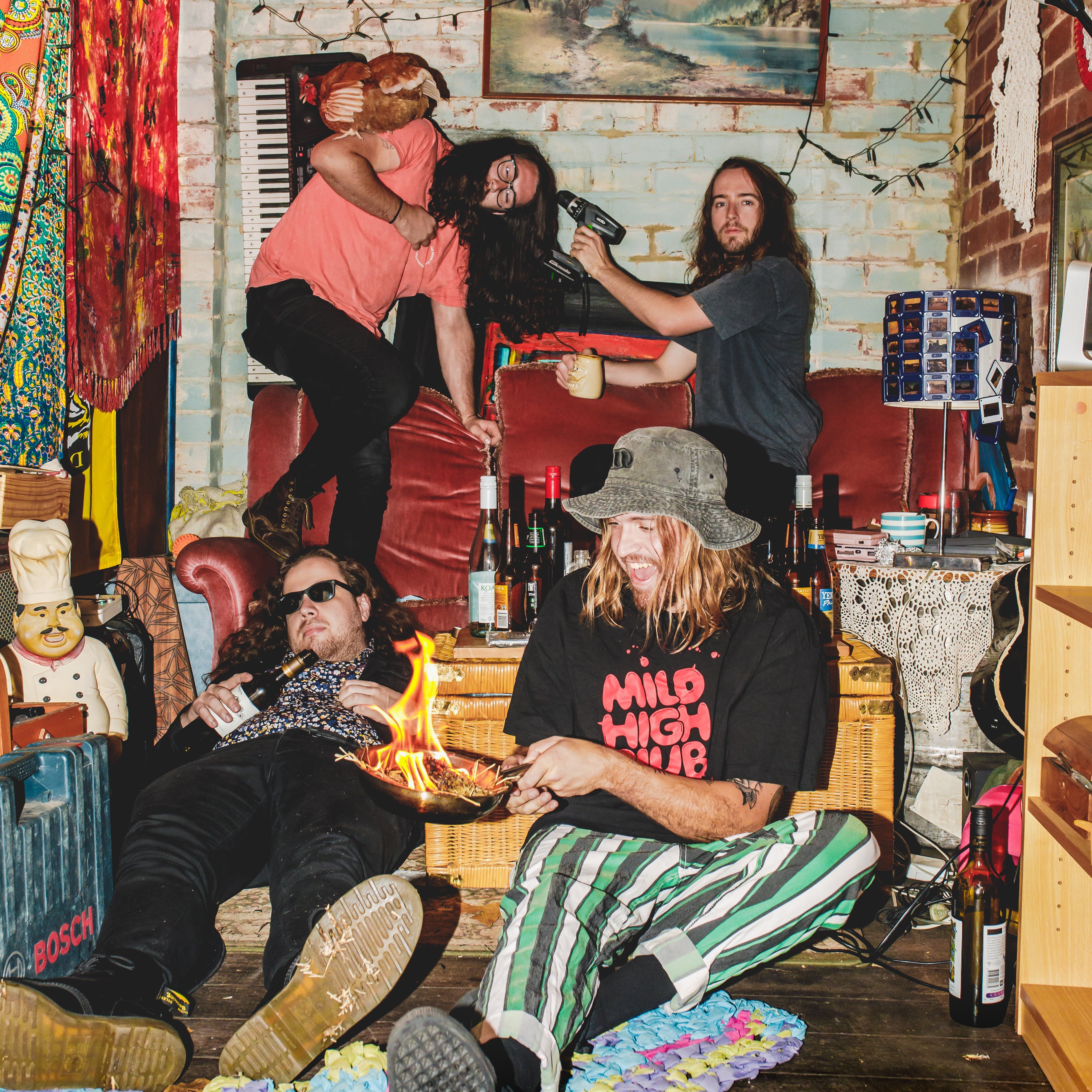 Take the trail out of Perth via Leederville and keep on driving, and you might just stumble across an old horse shed – one where weirdness roams free. Across the bridge from said shed, house parties rage until the early hours and beyond, while around the corner there’s a sky-high pile of trash that acts as a makeshift home for the local rat population. It’s here, amongst jam sessions that would last six-hours plus, that the wacky, sprawling sound of Psychedelic Porn Crumpets was born. “It had a tin roof, so it was really nice when it rained,” reveals the band’s frontman and ringleader Jack McEwan – an idyllic image that’s quickly scrawled over when he recounts a tale of said roof tearing off in the wind one night. “I used to have to wake up at 3am and spray myself with bug spray,” he adds with a shrug. Composing songs on an old, out-of-tune piano, and hooking up projectors to their amps to beam warped imagery around the clapped-out barn, their wonky approach to music-making took root amongst the hay. “We got too many noise complaints,” he admits, revealing that they’ve since decamped to a seaside home where they can make as much racket as they please. “It got into fine territory, but I don’t think we ever paid one, so it’s fine.” Originally formed as a uni course solo project for McEwan, who moved to the barn while “trying to live the bohemian life… until I ran out of internet”, Psychedelic Porn Crumpets’ night-long jam sessions and unconventional abodes are just the tip of their iceberg of happy accidents. He and fellow bandmate and guitarist Luke Parish met through a “local courier”, while their upcoming record ‘High Visceral’ – a riotous stomp of psych-rock escapism – was inspired by the most unlikely of situations: their time as tradies, working on building sites. The two then teamed up with Danny Caddy & Luke Reynolds, completing the line-up. Jack and pals needed something visceral. “We took the harder approach – big riffs,” he says with an audible grin, “When you’re on a site for six days a week, it’s nice to get back in the evening and go ‘RAAAAARGH’ into a mic.” That primal, intuitive style followed them through to their live shows, which would see the band writing a song one evening, and playing it in the local pubs the following night, inciting mosh-pits and wig-outs with barely a pause for breath. That unforgettable name is yet another example of their go-it-alone approach - “I wanted something memorable like marmite – you either love it or you hate it,” laughs Jack. Cracking a beer and preparing for another evening in his basement studio, he paraphrases an essay by fellow Perth resident Nick Allbrook of POND as key to his musical mindset: “Everyone calls Perth the most isolated city, and you kind of are… you’re unaffected by great architecture, or 1000 years of history, so you want to create your own tale.” One thing’s for sure - the Psychedelic Porn Crumpets’ tale is already one for the ages.
PAST SHOWS