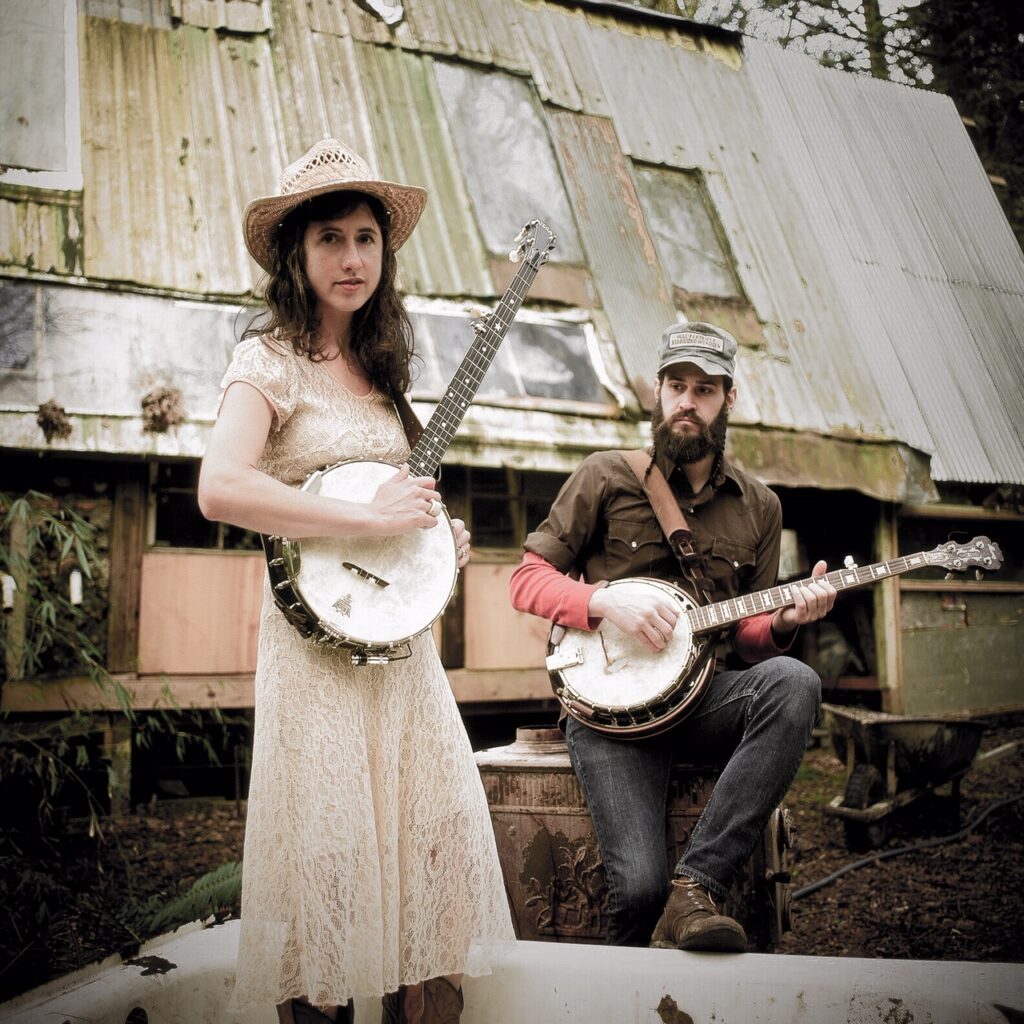 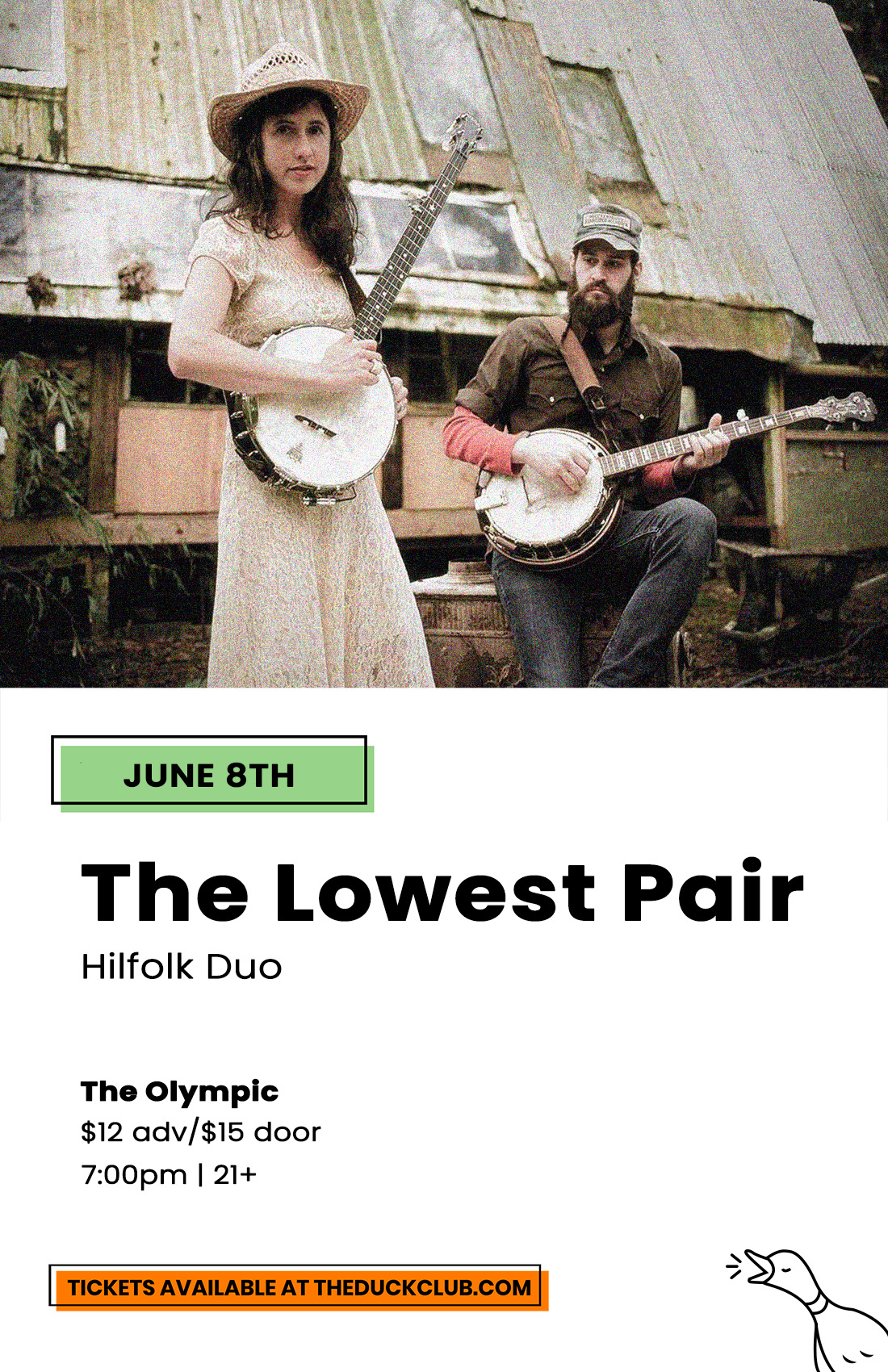 Kendl Winter and Palmer T. Lee are two kindred spirits who first met on the banks of the Mississippi while touring the Midwest festival circuit. Born and raised in Arkansas, Winter found herself drawn to the evergreens and damp air of the Pacific Northwest, as well as the boundless music scene of Olympia, Washington. She released three solo records on Olympia-based indie label, K Records, and performed in ramblin’ folk bands and anarchic punk bands before serendipitously meeting Palmer T. Lee in 2013. Lee had built his first banjo when he was 19 from pieces he inherited and began cutting his teeth fronting Minneapolis string bands before convincing Winter that they should form a banjo duo. Now, as The Lowest Pair, they have recorded and released five albums together, relentlessly toured North America, and ventured to the UK twice, playing over 500 live shows over the past five years.
After each releasing solo albums via Conor Oberst’s Team Love Records in 2018, Winter and Lee began working on The Lowest Pair’s forthcoming 10- song set, The Perfect Plan. As a songwriting team, the duo tends to see artistic sparks all around them — in poems, people, ideas, experiences – and throughout the process of writing these new songs, they felt the need to push their creative limits. They turned to producer Mike Mogis of Bright Eyes who took them to ARC Studios in Omaha, Nebraska, and set them in a soundscape backed by a slate of session players that lifts the album from simple folk into spirited Americana and beyond. Clawhammer banjo and acoustic guitar still hold the heart of The Lowest Pair, but the fleshed-out sound of The Perfect Plan leans gently into Winter’s punk past, as well as the sonic playground of her mind, to set the band down a new path on their musical journey.
Ahead of the record’s release, Winter and Lee each took some time for outward and inner exploration in order to refuel the creative energy put into The Perfect Plan. Winter headed to the South Pole to work in a scientific research station, an opportunity she hadn’t sought out but couldn’t pass up. “It’s very different than living the musician’s life of road doggin’ and performing all the time,” she says. “It was the first time in a while I’ve held still and met and made friends
with a group of people that wasn’t based around music. The small community really is incredible, people from all over the world with different reasons they’ve ended up here. This place, the bottom of the world, will definitely leave its marks on me.” And Winter has left her footprint on Antarctica as well, winning the Annual South Pole Marathon in -36 degrees, at a pressure altitude of 10,300 feet, and setting a new record time in the competition for women.
As Winter headed south, Lee went north to a small, wooded cabin in the Driftless hills of Wisconsin [for a writer’s residency] where his lessons in presence involved lots of wood chopping and water carrying. “My objective wasn’t necessarily a list of goals or things I wanted to create, but to learn to observe my process — the way I live and how it lines up against the way I want to live — to learn more about the way I construct a day and could construct a day,” he confesses. “I would storm up and attempt to execute these, sort of, experiments on myself. I would consciously manipulate my time, my mind, my focus, my crafts, and projects to learn more about how I am affected by things both inside and outside of me, what gets me stuck and how to unstick myself.”
Whether together in the studio or thousands of miles apart, Winter and Lee are two sides of the same coin whose experiences define and support each other. And The Lowest Pair harnesses and harmonizes that wisdom in The Perfect Plan as a way of distilling the magic of their partnership into a singular tangible experience that speaks to audiences across genres and through various artistic avenues.
“I love the stripped-down versions of these songs,” Winter admits. “I think they leave a lot to the imagination, and I trust people have enough juice to choose their own adventures in the space that the band fills out on the record. But we also can’t wait to tour with a full band and to see how that magic translates on stage. It felt really exciting in the studio, and the songs pack a much greater punch with the added instrumentation.”