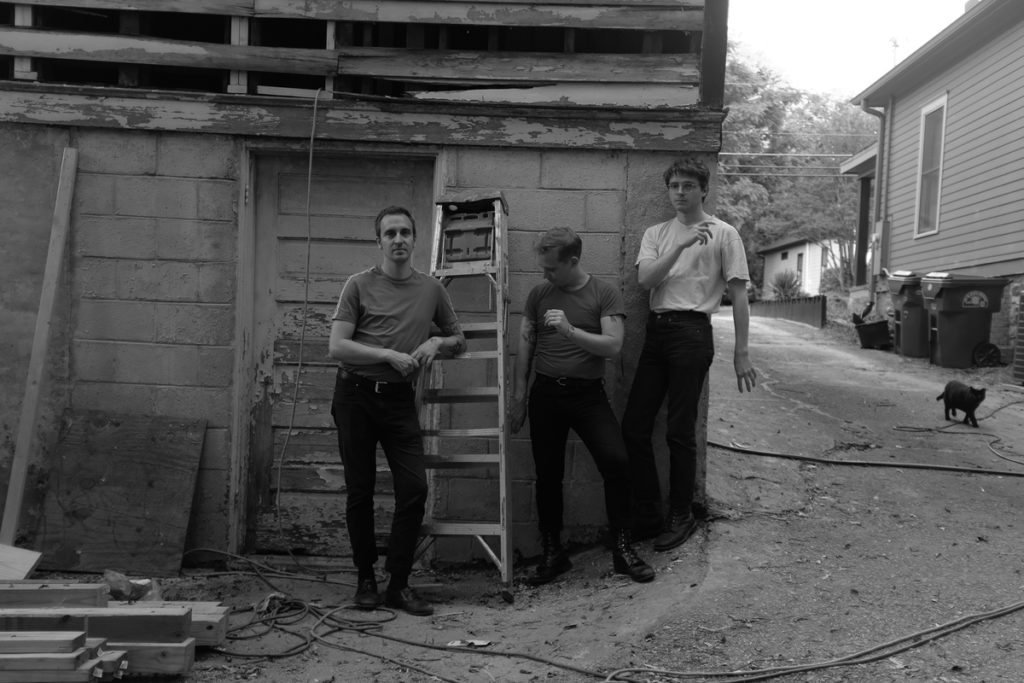 Enter Networker, the new album by Omni and first with indie giant Sub Pop Records. Their sound is still defined by sparse drums, locked-in bass, blistering guitar, and nonchalant, yet assured vocals, but from the first notes of “Sincerely Yours” you’ll immediately notice that Networker sounds much cleaner and more “HI-FI” than their prior two albums, Deluxe (2016) and Multi-task (2017). The departure in fidelity suits the new record and allows the listener to enjoy the nuances of their meticulous arrangements. Don’t worry, the riffs of Gang of Four and Wire are still present, but the production is more lush and the harmony is even more expansive. Despite nods to the sounds of the ’70s and ’80s what comes through is a record fully rooted in the here and now. Thematically, this is apparent on the title track “Networker” taking a candid snapshot of the “digital you” aspect of life in the age of the internet. The otherwise fun romp “Skeleton Key” also acknowledges the “direct message and obsessive” side of social media with lines like “if you don’t like what you see, the pretty face on the screen, scroll on by…”

Networker was written half between tours and half during recording sessions. The band, Philip Frobos on bass/vocals and Frankie Broyles on guitars/drums/keys, returned with longtime collaborator Nathaniel Higgins to the studio in South Georgia where they also recorded Multi-task and most recent single “Delicacy.” In this case, the “studio” is a cabin near Vienna, GA (pronounced Vye-anna) that was built by Frankie Broyles’ great-grandparents in the 1940s. The band completed four sessions between November 2018 and April 2019. Omni hit their stride in the cabin with songs such as “Moat,” which cruises along at a nice mid-tempo clip with sounds that are maybe piano or maybe the “behind the bridge” strings of a Jaguar a la Sonic Youth or This Heat. “Blunt Force” provides a nice contrast to some of the more upbeat cuts, getting jazzy with it’s less traditional arrangement and psychedelic outro.

On “Courtesy Call,” Omni successfully ride the line of being able to pleasantly reference influences without mimicking. They venture into experimental Haruomi Hosono territory while still managing to sound like Thin Lizzy. The same could be applied to “Sincerely Yours” where the fantastic guitar work and a beautiful breakdown in the middle dive into late 70’s jazz production. On standout cut “Present Tense,” Yellow Magic Orchestra vibes are present in the fun synthesizer riff while the guitar counterpoint checks this direction pulling the song back into something fresh, sharp, and definitely Omni.

Overall, Networker is simultaneously fun, catchy, and contains some truly impressive musicianship. This combo is especially hard to pull off as bands that are great players often don’t have great or memorable songs. Omni and Nathaniel Higgins have done a stellar job of reigning in their diverse influences into a cohesive record by curating their sounds into a tight package that leaves you just on the cusp of understanding where the band is coming from, while still feeling like you’re hearing something totally fresh. While their earlier records had more of a “post-punk” sound, Networker is an amalgamation of the best sounds of the ’70s and ’80s, all arranged with (mostly) guitars, bass, and drums for our contemporary age, and it really works! There are hooks everywhere, vocal and instrumental, that will leave you humming along, even during the first listen. As Philip Frobos says in “Present Tense,” “guess who’s on my mind right now?” Well, Omni’s on mine and will be on yours soon.