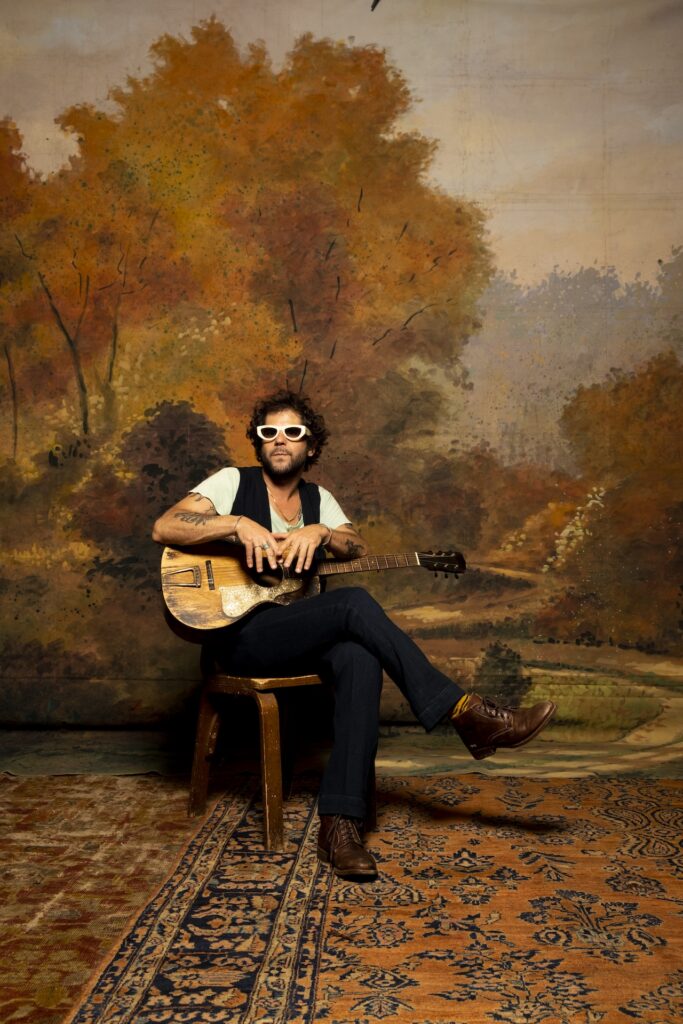 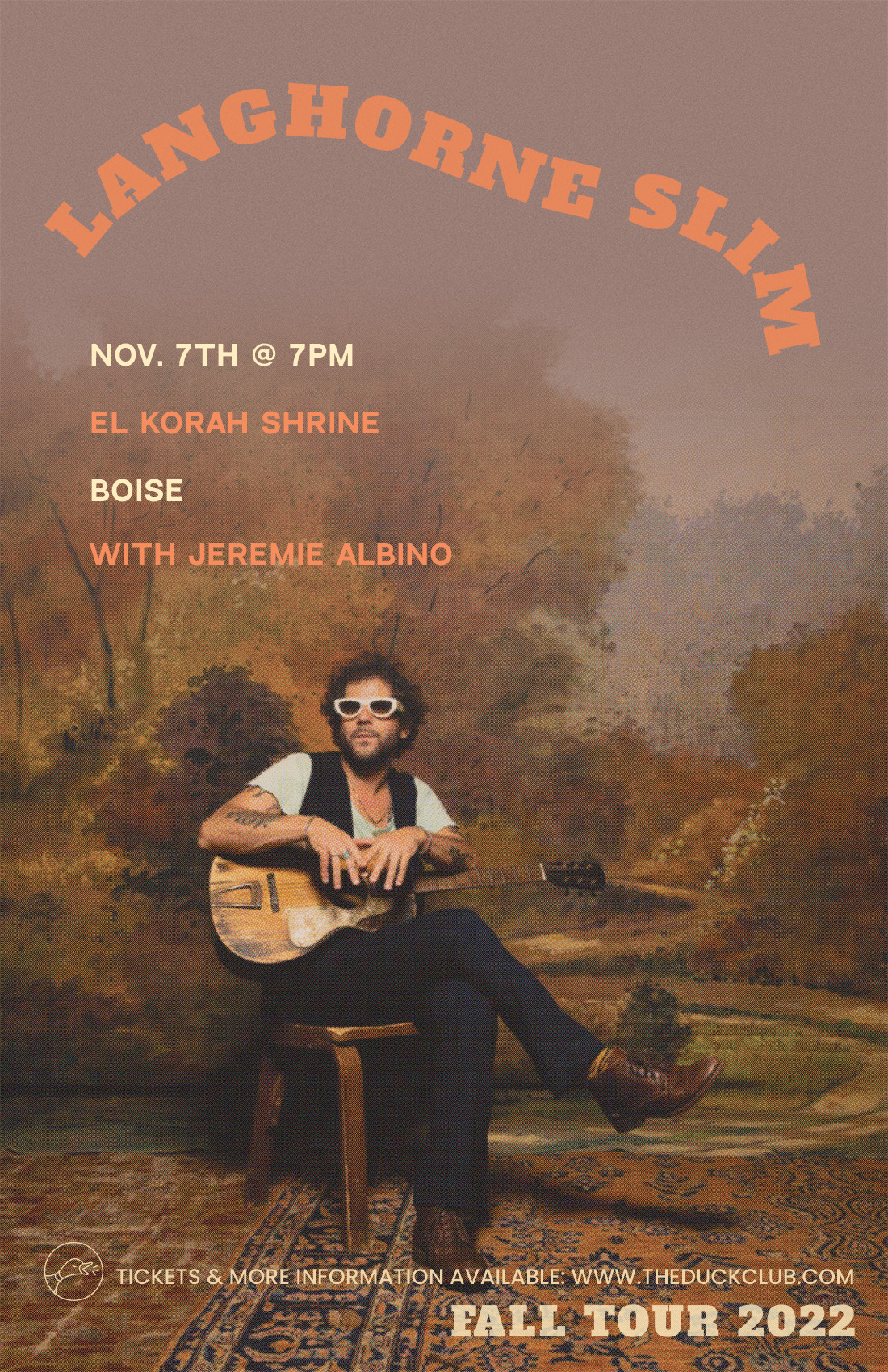 Langhorne Slim didn’t write a song for more than a year. A battle with clinical anxiety disorder and prescription drug abuse, which came to a head in 2019, had dimmed the light within. The man who once seemed to ooze spontaneity was now creatively adrift, stumbling along in the fog.

In December, he entered a program and, for the first time in a long time, a path toward healing began to emerge. He began to see that inner peace was possible, even with the world outside raging.

A few months later, in February, a tornado came and decimated East Nashville, his adopted hometown. Covid-19 took root just days later, changing lives forever. In the early days of his recovery, a different reality was beginning to take shape, both within and without. New worlds were being born; old worlds were dying.

Knowing he was struggling to write songs and make sense of it all, Slim was finally able to flesh out a throwaway ditty one afternoon. His close friend Mike then suggested he try penning a song a day. Slim didn’t like the idea, but he gave it a shot.

To his surprise, the songs came. In a flurry of stream-of-consciousness writing, the new tunes tumbled out, one after another, like little starbursts of joy, gifts from the gods you might say. Slim was tuning out the noise and finding beauty in the madness of a world coming undone. Over the course of a couple of months from March to May, Slim penned more than twenty that were certified keepers. Out of this bumper crop came the songs that make up his new album, Strawberry Mansion, which is being released this winter on Dualtone Records.

“I wasn’t sitting on the songs and I wasn’t overthinking them,” Slim says of the writing process of those months. “Something cracked open with the slowing down and the stillness of quarantine.

After finishing a song, whether he liked the tune or not, he’d call Mike, a videographer, and they’d record it and post it to Instagram. It was a form of therapy, he now realizes. “There was nothing precious about the process and it was a bonding thing between me and Mike as much as anything else,” Slim says. “It also gave me a release and maybe some potential form of healing, and was an opportunity to not always listen to the shitty thoughts in my head. I wasn’t ever thinking that I was writing songs for a new record.”

Prior to this creative outburst, Slim’s anxiety had grown so acute there were times when he actually feared picking up his guitar and trying to write. With the help of therapy and friends, he was now learning to confront his demons rather than run from them. So, in the midst of a panic attack one day, he picked up his guitar and the song “Panic Attack” was born. It’s a raw, off-the-cuff number that rises above the dark subject matter with spirit, irony and humor. “I called a healthcare professional/ Wanna speak to someone confidentially/ Don’t know just how I’m feelin’/ But I’m feelin’ feelings exponentially,” he sings.

Album-opener “Mighty Soul” details a world beset by Biblical-grade plagues (coronavirus, the Nashville tornado) and government malfunction. It ultimately calls for healing through community and the recognition that we can all make a difference. It functions as the album’s spiritual center, a secular gospel number for all mankind.

“Morning Prayer” is inspired by the songwriter’s effort to pray for the first time in his life. “It’s not in the key of any one religion,” Slim says of the number. “For this, I’m grateful that my guitar was unknowingly yet appropriately out of tune. It’s a song to help me practice compassion, surrender, connection to nature, the spirits and beyond.”

The second part of “Morning Prayer” is one of the most affecting moments on Strawberry Mansion, with the singer reaching out and offering prayers for his loved ones who are struggling, for all of humanity, really. “For my friends who suffer/ For my mother, father and brother/ For a world down on its knees/ I pray for thee,” he sings with great poignancy.

The road to Strawberry Mansion, which was recorded at Daylight Sound in Nashville with longtime compadres Paul DeFigilia (Avett Brothers) and Mat Davidson (Twain), began in 2019 with Slim’s decision to get sober. Even though the singer-songwriter kicked alcohol years ago, the insidious monster of addiction had crept back into his life in different guises. The last straw came during a road trip with a friend, who, at the end of the journey, let it be known that the man he knew and loved was no longer recognizable. So Slim called his manager and loved ones and soon checked into a program. That experience and his ongoing recovery program have given him a framework for grappling with the personal demons that have always skulked in the shadows, and helped him find light in the void. “It’s important for me to talk honestly about these things, because I feel it gives me strength, and it might help others along the way.” he says.

Strawberry Mansion is the singer-songwriter’s seventh full-length album. He released his first record, Electric Love Letter, back in 2004. Since then he has graced the stages of Bonnaroo, Lollapalooza, Newport Folk Festival, and the Conan O’Brien show, winning fans over with his heart-on-a-sleeve sincerity and rousing live shows.

Born Sean Scolnick in 1980, Slim took part of his artistic moniker from his hometown of Langhorne, Pennsylvania, a place he’s still very much connected to despite making his home in Nashville. Since the advent of Covid-19, he has been traveling back to PA once a month to see his mother and grandmother, and, like many Americans, finding strength in his origins and family bonds. The title Strawberry Mansion refers to the neighborhood in Philadelphia where both of his grandfathers grew up, a place he calls “dirty but sweet, tough but full of love, where giants roamed the earth and had names like Whistle and Curly.” That idea of a mythical wonderland informs the new album from head to toe. Strawberry Mansion is not so much about nostalgia for the past as it is about the possibility of better days ahead in this world. These are songs that remind us we’re all part of a collective “Mighty Soul,” united in one journey, just like the characters in that old Philly neighborhood. It’s a life-affirming album for these times. 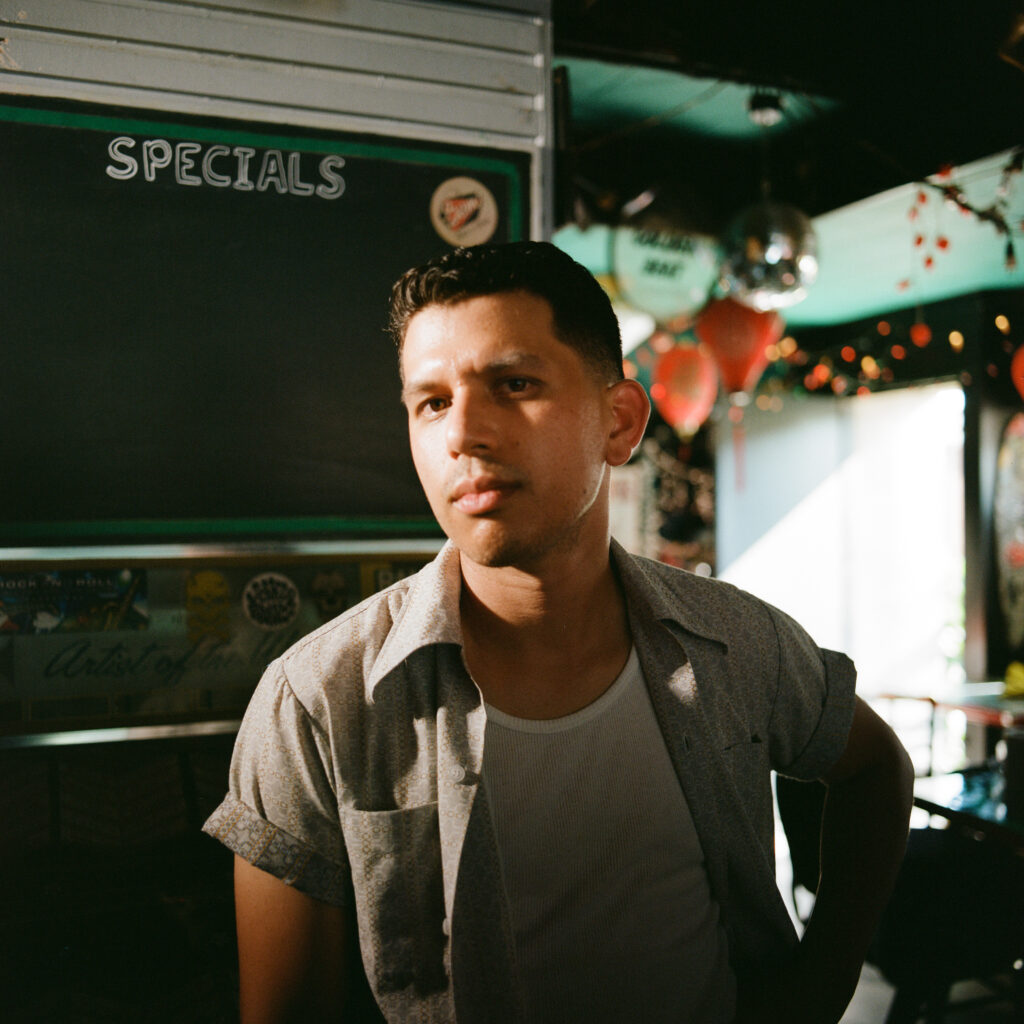 Spurred by pandemic-induced constraints, Albino got creative with his new material. “I couldn’t get in a room with anybody and rehearsals with the band kept getting pushed back. I thought, OK, how am I going to make a new context here?” he says. “In February of 2020 I had been on tour with [award-winning duo] Shovels & Rope and I knew Michael Trent produced his own records. I’ve been a fan of theirs for a long time. It just made sense to reach out and see if he was down to work on something from abroad.”

This necessity for openness led to new experiences in songwriting, recording, and production. Albino sent a handful of acoustic demos down to Charleston, SC, which began a surge of creative momentum. “I’d send Michael a version of something and he’d work on it and send it back,” Albino recounts. “We both brought something of ourselves to these songs. It was great to have external input in an otherwise isolating time.”

Odes to homes near and far are all over Past Dawn. So is a deep contemplation of illness and the loss of family, as well as poignant addresses to loved ones. Albino’s voice is equal parts warm and brisk on “Acre of Land,” a romping opener, written at a backyard BBQ with Khalid Yassein of Wild Rivers. “The Night Was Young” is an addictively anthemic, ballad-esque road-song, while a melodic sensitivity gives way to a plaintive gravel on “Buck,” a song co-written with Michael Trent. Albino’s delivery is signature throughout: moving from clear-eyed melancholy to upbeat riffs with a lilting timbre that’s refreshingly unfiltered.

The past few years have been non-stop for Albino, with Past Dawn following Blue Blue Blue, his 2021 release with Cat Clyde. After 2019’s Hard Time, that makes three records in three years. He’s moved to the city, leaving behind the farm in Prince Edward County where he lived and worked for over a decade. With a sophomore album and multiple tours in the works, he’s solidified himself as a touring musician who knows how to honour the histories of folk and country while staying firmly in the present.