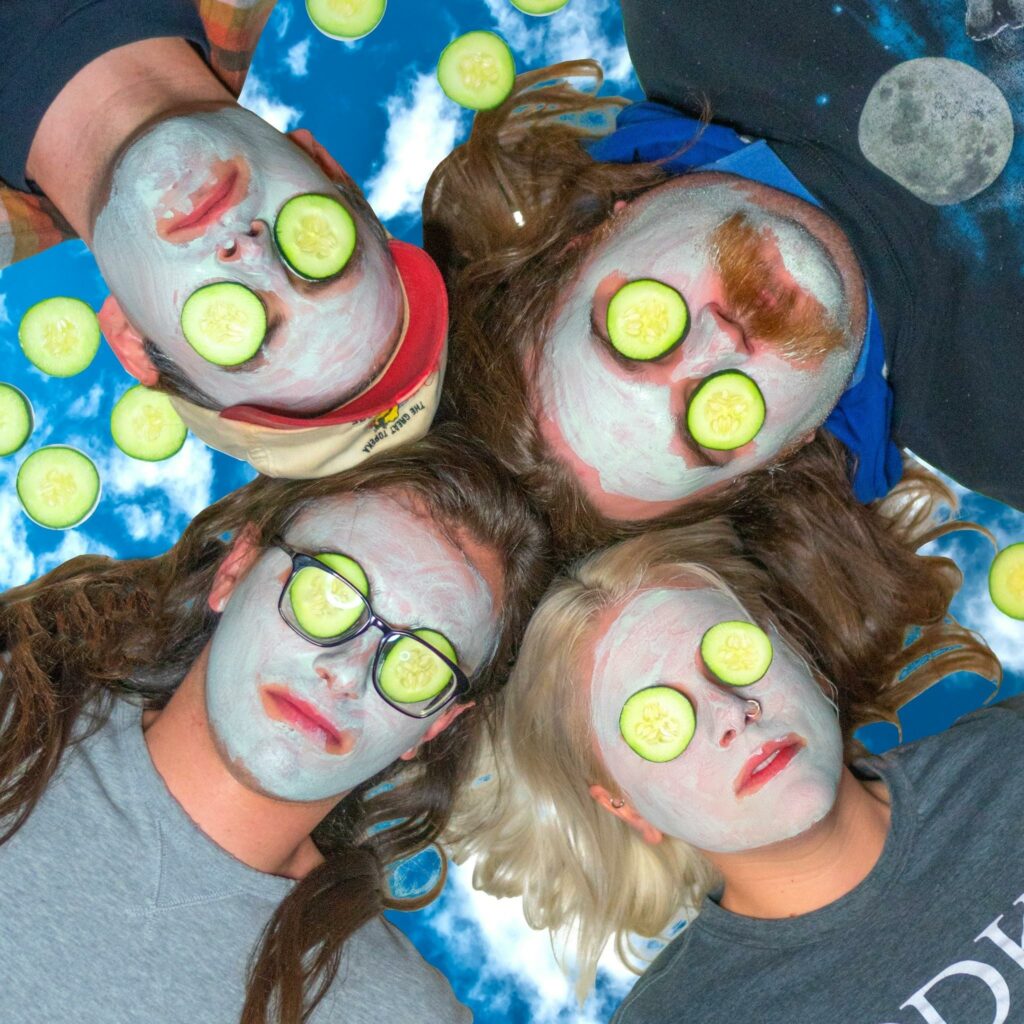 Back in 2008, after getting kicked out of college (where they majored in marimba performance), vocalist & multi-instrumentalist Lacey Hopkins met vocalist & multi-instrumentalist, Skylar Smith, at a Friendsgiving party gone wrong. The two bonded over screamo and French electropop, and went on to play together in various bands until forming Dreamgirl in early 2013. Dreamgirl’s first EP, “Sensually Yours,” was released, quietly, on Bandcamp the next year, and, with the addition of a few tracks, would transform into the group’s breakout offering, 2015’s the “Illuminaughty” EP (also released quietly). Drummer/engineer Ian Dobyns joined in 2016; a friend and schoolmate of a former member, the band nabbed him from the post-hardcore scene. In 2017, an unknown teen from Belgium uploaded the band’s discography to YouTube, catapulting “Teenage Blue” into the realm of existence. With a new zest for life following the sleeper success of their hit song, the band began performing across the continental United States, playing shows with TV Girl, Homeshake, Tennis, Bleached, Surfer Blood, HUNNY, K. Flay, Girlpool, Gus Dapperton, BRONCHO, Sports, Mild High Club and Shy Boys. (They were slated to open for Aaron Carter once, but the show was canceled due to political differences.) 2019 saw them interviewed by Nylon, headlining a couple of their own tours and playing their first festival, Tropicalia. End scene. The year is now 2021. You might hear Dreamgirl on the radio in a college town. Bassist, formerly of Lawrence band Toughies, Joe Gronniger has joined and Dreamgirl continues to please with their latest single, “Sometimes.” Following “Sometimes” is the band’s next single, “Poolside,” and they are preparing for two tours and a full-length release in spring and fall of 2022, respectively.

Cody Han and Blake Dimas produce a danceable brand of surrealist dream pop under the name CD Ghost. The pair have journeyed from the lo-fi glaze of their debut EP “Ghost Hunting” to the richly ethereal dream bops of subsequent EPs “Here It Comes Again” and “Dreams We Share”, with tracks such as “Undercurrent” and “Roll the Dice” earning them attention online.Now the group joins Born Losers Records for their first LP-length project, “Night Music”. The project sees the duo expand their watercolor dream pop palette toward the edges and intersections of dark wave, avant-pop, and shoegaze. Written during a pandemic while the duo was split between L.A. and Beijing, the project reflects on solitude, change, and the passage of time.Like their previous work, the LP is full of hook-laden, beat-driven lamentations that find a way to stick in your ears and make their home. This time however, the tracklist contains both the group’s darkest and catchiest songs to date. The LP was conceived as an ode to night, inspired by the musical tradition of nocturnes – songs written about or for the night. Experiencing the LP is akin to quietly sitting through the night, observing its changes and watching the rise of the moon as cool air begins to surround. “Night Music” is out 11/11/22 on Born Losers Records.