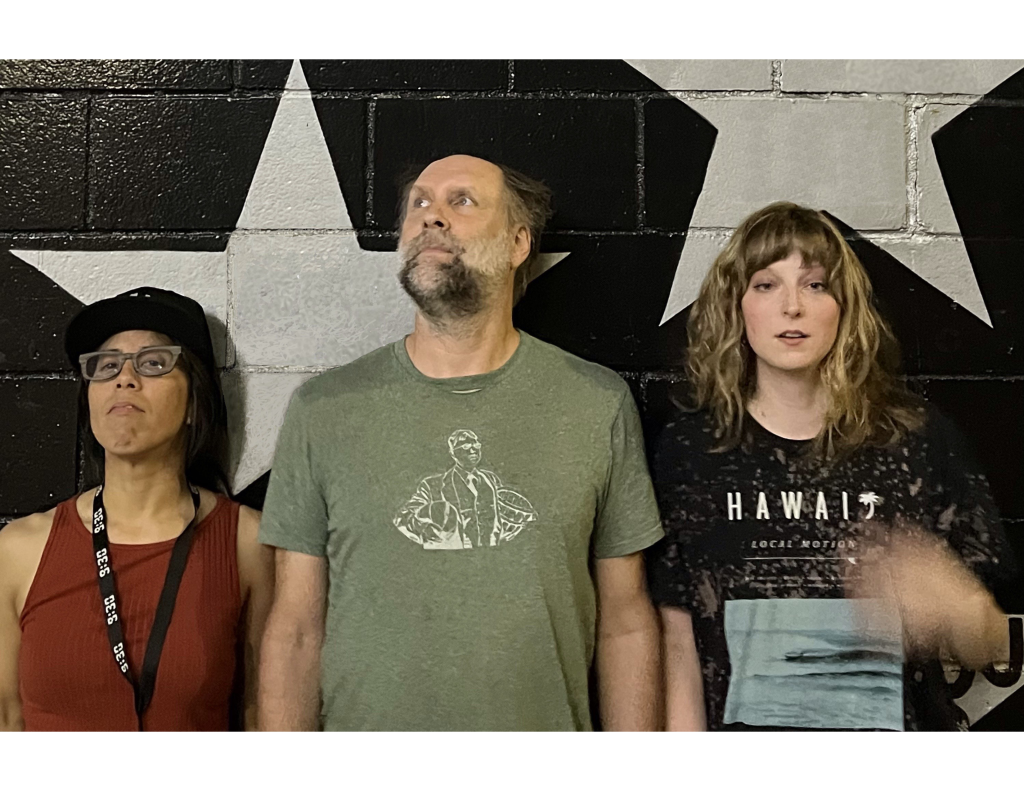 AFTER 28 YEARS, DEERHOOF RECORDS THEIR “STUDIO DEBUT”
AND IT’S ALL IN JAPANESE

SIT DOWN, LET ME TELL YOU A STORY. We look at the state of the world and think, “It’ll be a miracle if we survive.” But miracles are what humans do as our planet’s most inventive and unpredictable species. Miracle-Level is Deerhoof’s mystical manifesto on creativity and trust, its answer to the artificial industries of deception, coercion, and boredom we’re forced to put up with.

Surprisingly, Deerhoof’s 19th album is also their first to be made from beginning to end in a recording studio. Not because they had tired of their anarchic sound, but because they wanted to make themselves uncomfortable — by opening up their secretive DIY methods to someone new. Our research has not turned up many examples of a DIY band waiting 28 years before entrusting one of their records to a producer, but in summer 2022 Deerhoof decided to take a chance.

“Seemingly out of nowhere, I was presented with a miracle-level opportunity to produce Deerhoof for two consecutive weeks at No Fun Club in Winnipeg, Manitoba,” says Mike Bridavsky, a total stranger to the band until Joyful Noise founder Karl Hofstetter suggested him. “I began listening through their albums and realized: I have no fucking idea how to make a Deerhoof record. Did anyone? They’d assembled a catalog of thoughtful, wild, and unique records, each different from the one before. I was about to be inserted into a thriving creative organism that’s worked almost exclusively with each other, with unlimited control of every blip and bleep. This was the session I’d been dreaming of for my whole professional life—and I was terrified.”

Bridavsky realized he had to build trust—trust that he would safeguard their one-of-a-kind musical personality. “In my first call with Greg, I was relieved that we had an instant rapport. Their biggest concern was dispensing with the months of obsessive tinkering that usually make their albums sound so beautiful and insane. He told me, ‘We don’t want to do our usual aggro control-freak thing. We’re going for bare-minimum production that doesn’t push the listener around.’”

Nor was this to be the only departure from standard operating procedure. The band emailed Bridavsky the music they’d been listening to for inspiration: Rosalía, Meridian Brothers, Les Freres Michot, Ngola Ritmos, Mozart opera. It occurred to them that none of this was in English. Satomi decided that she’d like to forsake the language of “the world’s policeman” and write Miracle-Level’s lyrics entirely in her native tongue.

After months of paring their demos down to Deerhoofian nuggets of melodic, harmonic, and rhythmic gold, Deerhoof spent their final pre-recording week in a rehearsal room near John’s house in Minneapolis. There, just before Bridavsky’s 42nd birthday, Bridavsky met the band face to face for the first time. “They sat me down and performed the entire album from beginning to end. I knew we were about to make an amazing record. We went back to John’s where he prepared the most delightful fresh-baked pizza and apple pie followed by an a capella rendition of ‘Happy Birthday’. We hadn’t even made it to the studio yet, and this was already one of the best sessions I’d ever been a part of.”

Arriving in Winnipeg the next day, Deerhoof picked out guitars, drums and amps from the studio’s collection, Satomi chose the room where she most liked the sound of her voice, and Greg selected which of the studio’s three pianos he preferred for the album’s piano ballads.1 Five days later they had finished tracking Miracle-Level a day ahead of schedule.2 The fateful moment for mixing had arrived. “We’d reached a level of mutual trust where the band was comfortable with me mixing alone. I’d send them away and when I felt a mix was ready, I’d call them back into the control room to listen. The look of excitement and accomplishment on everyone’s faces is something I’ll never forget. Satomi, Ed, John and Greg tried something different on this record, and the result is Deerhoof at their most sparse and vulnerable.”

The brave record they walked out with at the end of two weeks is often unexpectedly sotto voce, a drama term referring to emphasis attained by lowering one’s voice. Miracle-Level is an avant-garde, anti-fascist carnival, its spicy surprises whispered conspiratorially, and lit by candlelight. Sit down, let me tell you a story celebrating the infinite small wonders of existence… the miracles that spontaneously present themselves when we’re not distracted by the tribalism and manipulation of our death-driven masters… the miracles that Artificial Intelligence will never replicate. Deerhoof speak in a secret code in which hooks abound, genre is nonexistent, and magic ever awaits us.

1 He liked the cheap upright with the special felt mute.

2 This band so used to their tiny home-recording setups could not resist lavishing an entire day on John’s unique vision for the guitar sound. Explains Bridavsky, “This seemingly overcomplicated setup, which turned out to be the defining sound of the record, involved John and Ed playing semi-hollow body guitars in an isolated room, with each guitar split into three separate signals: one through their pedals into an amplifier; one from dedicated microphone pointed at the guitar, run into a second amplifier, and one that summed both of the guitars’ direct outputs into a fifth, highly distorted amplifier that combined both guitar signals.”