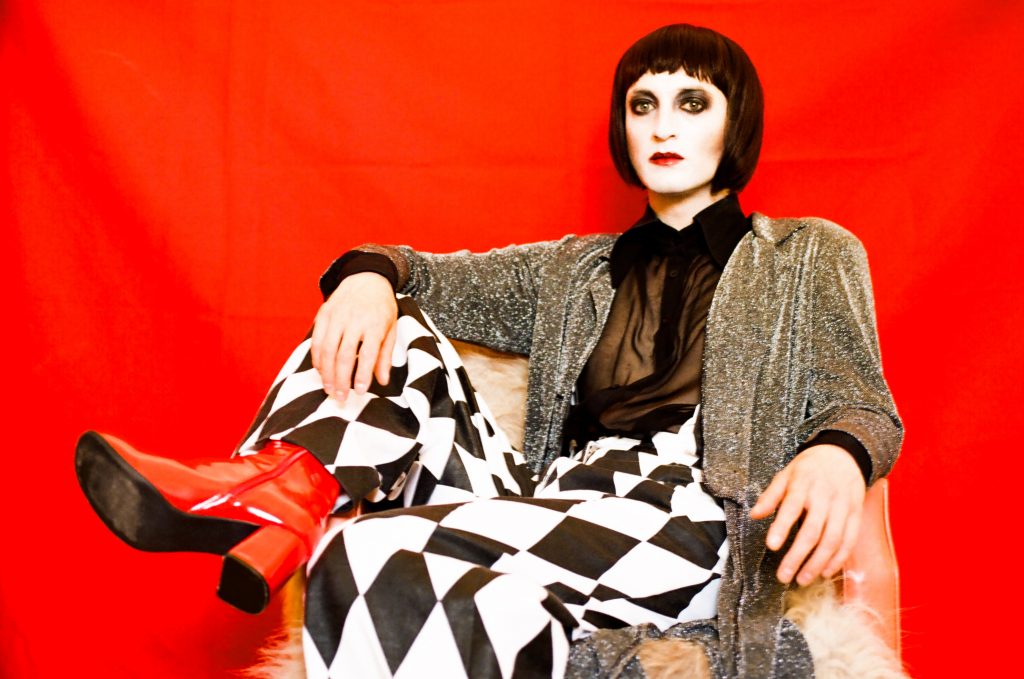 The Gulf Islands of the Pacific Northwest are an enigma. The islands jut up through the brisk waters of the Pacific Ocean, and just as the likes of Vancouver and Seattle exist at the intersection of opulences both natural and manmade, the islands host multitudes in their lush, hushed red cedar and Doug Fir skyscrapers. Art d’Ecco is one such multitude: an unapologetic, inclusive rock and roll mystic in a wig and lipstick.

d’Ecco’s new record, Trespasser, is a product of those islands, where he wrote and prepared the album in a cottage. It was in these woods, shrouded in fog rolling off the ocean and surrounded by deer, rabbits, and a reclusive neighbour, that Art d’Ecco found not just the clarity of stillness, but the loneliness and isolation of it. These he has distilled into a record of mystery, fluidity, and neon glam- rock stomp.

When d’Ecco moved into his grandmother’s cottage on one of the islands, he hadn’t planned on creating a new project. But, as it often does, circumstance charted his course. His grandmother, living with Alzheimer’s, suffered a related phenomenon called ‘sundowning,’ which triggers increased agitation and anxiety around sunset. “The only way to calm this lady down was to sit down at the piano,” says d’Ecco. He would play “Bohemian Rhapsody,” passing it off as Beethoven. “She would sit there for a couple hours just listening to me noodle away.” After she was relocated, d’Ecco remained in the empty house where he had played as a child. Draped in memory, he gravitated toward the piano, spending the long, lonesome, quiet nights on the bench before the instrument. This is where Art d’Ecco was created.

He relocated to a new cottage, but depression and loneliness followed him. Determined to return to music but cut off from the mainland music scene he was once a part of, he built a studio in his new lodgings, and barricaded himself with copies of Deerhunter’s Cryptograms, Bowie’s Low, and choice krautrock records. In this solitude, d’Ecco would chase tones for hours. The result is a richly-realized confluence of the ferocious spark of those trailblazers and a distinct sadness, with d’Ecco as mad scientist, stitching together these delicious fragments and animating them.

But the project was still insular, secret. d’Ecco would stumble across NO TRESPASSING signs in the woods around his cottage; he couldn’t shake them. “Trespassing is someone who doesn’t belong somewhere, and is forbidden from going somewhere,” he says. The alienation d’Ecco felt was present in those signs: cut off, isolated, restricted. He decided that he would ignore the signs, and he would ignore them as Art d’Ecco: an androgynous front person in a lipstick, wig, and costume.

The fluidity that d’Ecco embraces had its day in the sun with glam rock’s celebration of androgyny, but the mainstream in 2018 is painfully lacking in beyond-the-binary experiences. d’Ecco wants to change that. “It’s gonna make some people feel uncomfortable,” he says. “Maybe I don’t belong. But I’m pushing my agenda on the masses.”

That agenda includes more than overdriven guitars, Italian analogue synths, and d’Ecco’s ear for melancholic melodicism. It means balancing the scales, encouraging inclusivity and love, and dethroning the dudes-in-jeans-and-t-shirts aesthetic from alternative rock. “I’m into androgyny and the theatre of the bizarre and the absurd, and challenging the masculine overtones of the rock and roll industry,” he says firmly. “The aesthetic of rock is a little tired.”

“In the ‘70s, rock and roll and glam rock, it was playful,” he continues. “It was dark at times, but overall, it was very inclusive. You could be a freak, you could be a jock. Everybody was welcome at the Aladdin Sane tour. Rock and roll felt more inclusive back then. I felt maybe if I strip the masculinity out of my aesthetic, it will allow me to be sonically more heavy.”

Opener “Never Tell” kicks off with that heaviness, a bass-driven burn in the vein of Roxy Music that finds d’Ecco cooing secretively in falsetto over the pumping rhythm: “I never tell/Loose lips sink ships.” Tracks like “Who Is It Now?” recall the throbbing grind of Let’s Dance while “Last In Line” bursts in with Raw Power guitars before expanding to d’Ecco’s soon-to-be-trademark synth theatrics as he cries, “It’s just a thing called love, and I keep fucking it up!” “Dark Days (Revisited)” finds him “looking back through the hourglass of time,” bringing a darkened period of his life to the surface as guitars and keys careen out of control in a miasmal haze. d’Ecco says its about acknowledging darkness, and triumph over it. “I wanted it to sonically represent frustration,” he says.

Trespasser, like its guarded title might suggest, spends plenty of its runtime in minor keys, but it does so without trading in kinetic energy and undeniably pop appeal, with d’Ecco’s at turns whispery, sensual falsetto and booming, powerful howl hemming in the sonic architecture. “There’s something about minor key pop songs,” he says, citing Stanley Kubrick, master of the banal-turned-grotesque, and David Lynch, the auteur who serves as shorthand for ‘the absurd,’ as aesthetic influences. “There’s maybe a visually beautiful representation of something that’s really dark, and I like that juxtaposition. That’s the mental tramp stamp of Art d’Ecco.”

Indeed, d’Ecco relays his darkness through the intricacies of Trespasser. The stoned 3⁄4 waltz of “Lady Next Door,” finds him listening as an elderly widowed neighbour weeps herself to sleep each night, alone in her rocking chair. The song is rooted in reality. “I was thinking of my grandmother. She was literally the lady next door, rocking herself to sleep every night in a chair.” But d’Ecco is also touching on something bigger: “It’s about this sad existence that we all live in a compartmentalized world. If only we could just say hello to each other, reach out to each other, it might make the pain less insufferable.”

This, really, is at the core of Trespasser: a call to expose our pain, set it to a melody, and dance to it in a darkened room. “Trespasser is an album about what is, what was, and what could’ve been,” d’Ecco says. “Sometimes you gotta get dark before you find the light.” 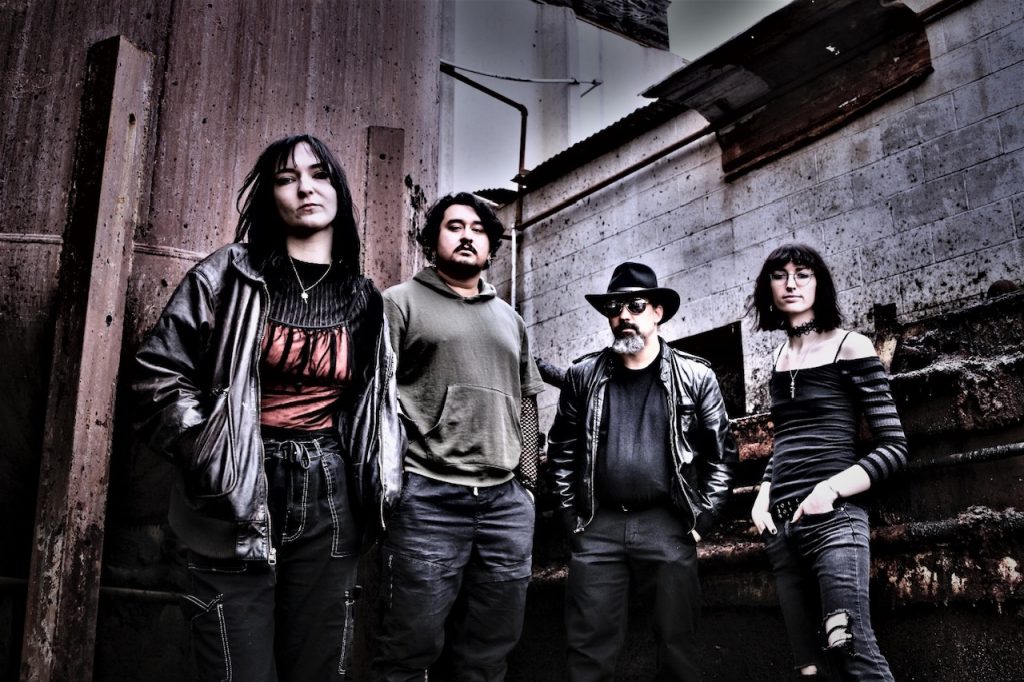 Bone Haus delivers a sound and DIY vibe that is largely missing in the modern pantheon of rock music. Drawing influence from 60’s style garage-blues, minimalist post-punk, and desert rock psychedelia, the group has garnered a growing fan base that embraces their diverse and innovative approach to songwriting coupled with compelling lyricism and driving rhythms.