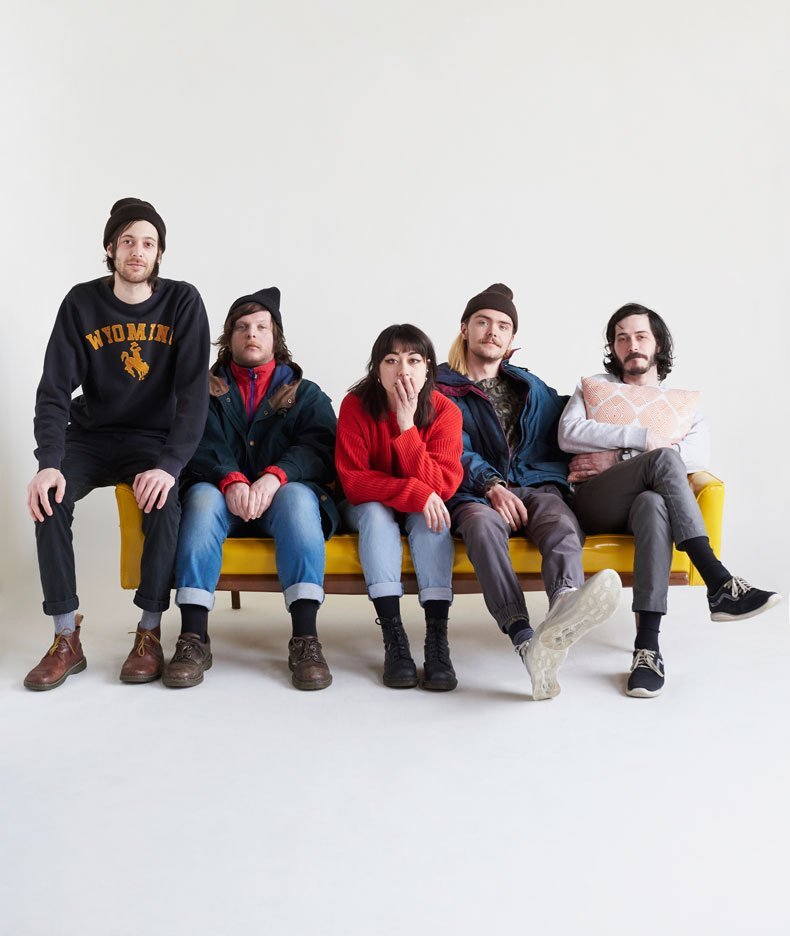 The Spirit of the Beehive

The Spirit of the Beehive have a fascination with contrast. The cover of their 2015 EP YOU ARE ARRIVED (but you’ve been cheated) juxtaposes the rare beauty of an urban sewer canal during sunset, with a washed-up body of a young woman sprawled peacefully beside some floating trash. The album that followed, 2017’s pleasure suck, explored the sick irony of pain brought on from overindulging in bliss. Its first track featured the line, “pleasure sucks the life out of everyone,” and the record’s erratic nature—spontaneous shifts from flowery psych-pop into dissonant passages of grimy distortion—evoked the discordant effect frequent substance use has on one’s psyche. Hypnic Jerks, the Philly quintet’s third full-length and second for Tiny Engines, sounds like, as frontman Zack Schwartz puts it, “the state between wakefulness and sleep.” It’s named after the involuntary muscle spasms that can happen right as someone begins dozing off, a perfect feeling to compare the album’s drowsy yet restless character to. Unlike the spiraling momentum of pleasure suck, The Spirit of the Beehive took a more grounded approach with Hypnic Jerks, though the ground they’re standing on is equally otherworldly. Dreamy is a fitting adjective, but the songs never fully slip into the peaceful yet backgrounded character of dream-pop. Rather than an ongoing fantasy, the record has the quality of an indescribable dream fading from memory as you slowly begin to regain consciousness. Its warped guitar tones, transcendental synths, and smattering of eerie audio samples—most come from bassist Rivka Ravede’s old family recordings, which Schwartz sifted through and edited together—conjure this purgatorial space between reverie and reality. An arena where their songs unexpectedly contort themselves and take on different textures, morphing in and out of one another. These tracks were initially designed to comprise a “short mixtape,” which explains the record’s nebulous structure. If you’re not paying close attention to the tracklist, they could easily be mistaken for one, long song. The first two, “nail I couldn’t bite” and “mantra is repeated,” are mid-paced, ethereal bops that sound like if Donovan was informed by The Microphones. They verge on soothing, but they’re quickly followed by the album’s loudest cuts; the tubular “fell asleep with a vision” and “can I receive the contact?”— the shouted ending of the latter being the point where you realize Hypnic Jerks is, deceivingly, not an album one can easily knock out to. “d.o.u.b.l.e.u.r.o.n.g.” begins with a minute-and-a-half- long sample of what once was a cute recording of a grandfather narrating a visit with his grandkids. Here, the band coated it with haunting reverb, scraped it with vocal processors, and uses it to transition into what’s both the prettiest and grimmest pop song the Beatles never wrote. “I’m saying things all wrong / I’m doing things all wrong / now everything is wrong,” Schwartz sings with a quivering intonation, as if he’s physically holding back tears. However, it’s the celestial harmonies, balmy keys and creeping false climax of album closer “it’s gonna find you” that secures The Spirit of the Beehive a seat at this decade’s table of musical visionaries. The track ends with a similarly whirring sample to the one the record began with, finally rocking you off to sleep after ten songs, but leaving you with the undying curiosity to play back what you think you just heard. Jerking your mind awake yet again. (bio by Eli Enis)
PAST SHOWS

The Spirit of the Beehive