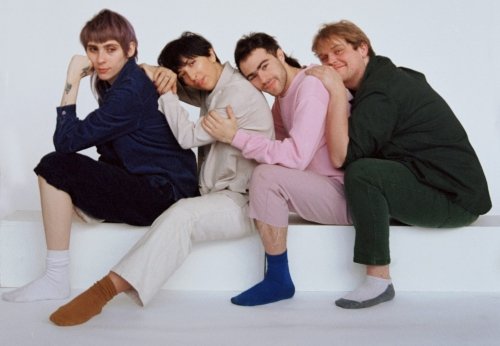 Tenci began as Jess Shoman’s bedroom-folk project in Chicago in December 2018. With the help of Spencer Radcliffe and Tina Scarpello it quickly became something more fully-formed. By spring of 2019 they’d recorded their debut My Heart Is An Open Field. They recorded the album in Radcliffe’s home in just a couple months. Having played in the band, he understood the tenderness it needed to maintain. Half of the songs were written the week before. The album retains that spontaneity and rawness. Shoman says “It was such a fun way to record without second guessing myself and to let things be.” “Earthquake” kicks off the album, a peel of quavering, high-noon guitar cutting through, a flash of lightning illuminating the wide open space the record inhabits. The jarring opening subsides into a gentle shuffle— a cradle for songwriter Shoman’s wild and pure voice. The song is about that ache when you recognize a feeling or a person starting to fade. As you desperately grasp to keep it close. “Serpent” was one of the first songs Shoman wrote. It imagines what it would feel like to get bitten by a snake and ties that to how it feels to lie to yourself and the dizzying pain it can cause, the guitar solo repeatedly sinking its teeth in. Shoman says about the song, “It’s not until you finally speak your truth and become vulnerable that you can have relief and resolution, even if that means the death of something.” The band name comes from Shoman’s grandmother’s name Hortencia, who she feels is her kindred spirit. Her memories of hearing her sing while cooking or cleaning influenced some of the same qualities in her own voice, a sweet and shaky vibrato she could feel moving through her. The end of Side A of the record is a voicemail from her grandmother reminding Jess of how much she loves her, “Don’t get tired of my calls, love.” My Heart Is An Open Field is about the wavering feeling of laying everything out in the open where sometimes dormant memories bubble up to show their faces. It’s about picking at your own knots and scabs and eventually joining yourself in an honest and present form. This album is filled with nuance– breaths of saxophone and flute, and touches of cello, piano, and pedal steel are hung on the sturdy folk songs of Shoman, whose vibrato and range cuts through these dreams like a loved one’s voice. The current lineup of Tenci includes Chicago musicians she met playing some of her earliest shows. Curt Oren plays saxophone, flute, and guitar. Isabel Reidy (of Izzy True) plays bss, and Joseph Farago (of Joey Nebulous) plays drums. They’ve added a depth and playfulness to the songs that have made them even bigger and full of life.
SIMILAR ARTISTS