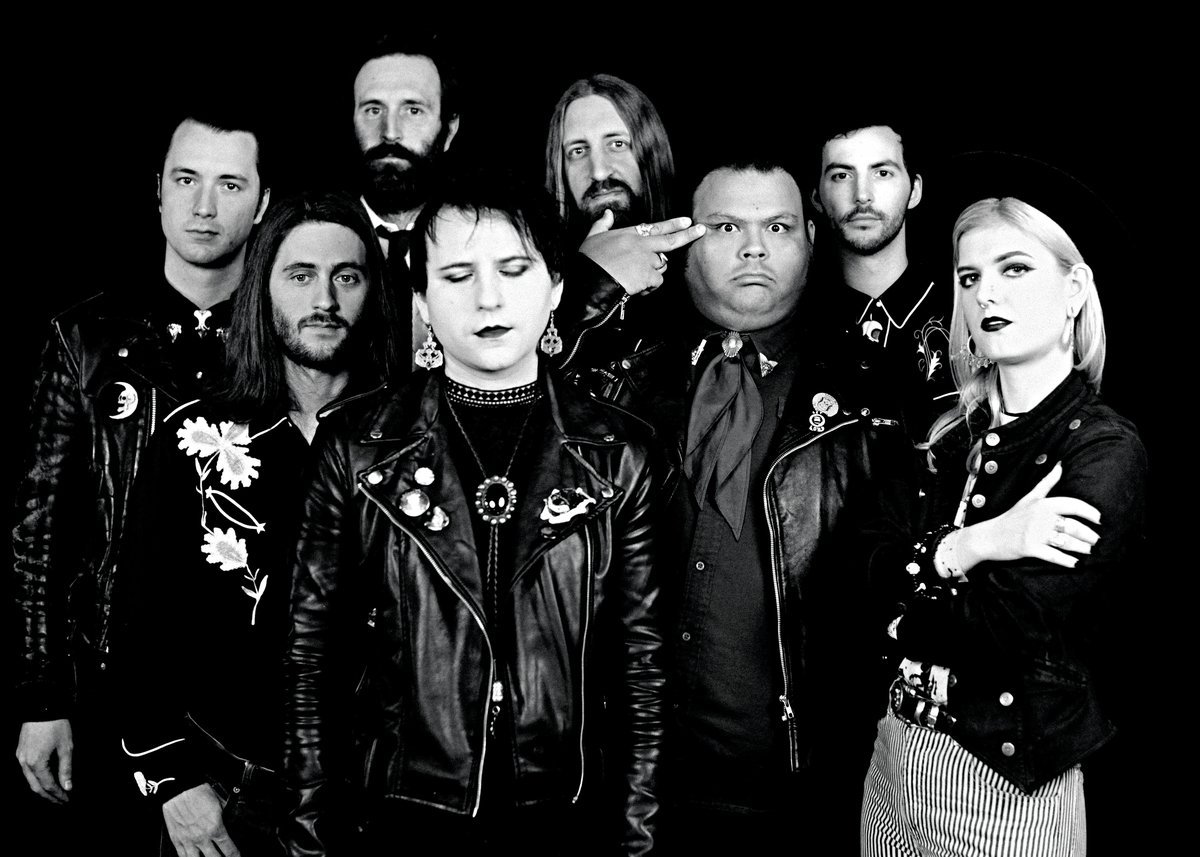 When asking Charlotte McCaslin to describe Roselit Bone’s new record, Crisis Actor, with one word, she responds, “fucked.” After several years of touring the US, the band has gone from relative unknowns to somewhat cult status, having perfected an infectious and powerful live show that falls somewhere between a demented Roy Orbison and an angelic Gun Club. Their anthems of loneliness, alienation, and triumph have allowed them to artfully navigate through a cluttered underground scene, captivating audiences and transfixing crowds in a nightly conversion ritual. On their newest release, she paints a picture of a world that is truly “fucked,” lacing vignettes of systemic violence, sexual confusion, and class warfare with a wry, suicidal humor straight from the gut of America. “I didn't see the ascendancy of fascism as anything new here, so my freshest feelings of disgust were toward anyone who could point their finger in one direction and walk away with a smirk on their face.” When asked how the punk influence fits in, Charlotte smiles, “I don't align with any genre. For me, the essence of punk is in dealing unflinchingly with the misery and violence of lower-class city life, coming out alive, and wearing your scars proudly.” Crisis Actor’s birth can be traced back to Charlotte’s time growing up in Southern California’s Orange County; a place where economic exploitation and casual discrimination were intertwined and buried amid a sea of sunshine and palm trees. Eventually she found punk, idolizing Los Angeles bands like X and The Cramps. Nights were spent traveling to the Inland Empire (Riverside County) to witness countless shows at the Showcase, which at times would break out into bloodbaths. It was punks on punks, cops on punks. “There was always a threat of violence from skinheads, tweakers, gangs, or the cops there.” At twenty-one, Charlotte had seen enough and ditched Southern California for the more insular Pacific Northwest, picking Portland’s grayed out radius as a welcome landing spot. “Ten years ago, it was cheap and a good place to strike out on your own,” she notes. By the time she met guitarist Victor Franco and drummer Ben Dahmes, the nucleus of Roselit Bone was born. Fast forward seven years and two full length records later, Roselit Bone entered Supernatural Sound (Oregon City, OR) to begin tracking Crisis Actor. Charlotte would oversee the majority of the writing and production. The sessions were long, yet after only a few days, the seven piece band had recorded the bulk of the record live. It was a valiant effort to capture the manic energy of their live set which previous records had yet to fully realize. Yet by the time Noah Georgeson (Devendra Banhart, Joanna Newsom) was tapped to mix the album, Charlotte was dealing with something on a much more personal scale. She was beginning a gender transition. “There are echoes of what was to come in the lyrics of this record. I spent hours tracking the vocals on the title track, getting deeper with each take into the headspace of the toxic, angry, sexually confused person I inhabit on that song. At the end of it I was totally drained and felt an amplification of the anxiety that I came to recognize as gender dysphoria.” And with such a revelation, there follows a sense of distraction that can accompany it, one that Charlotte is quick to point out. “I don't think people should see this album much through the lens of my transition, as it was written before I knew what was going on.” Beyond Crisis Actor’s self deprecation and societal condemnation, there’s a sweeter side that lies just beneath a half-cocked smirk. When singing, “I hate myself and I’m at war with the world around me” on “I Pissed The Bed,” the tension between honesty and illusion is forthcoming, and ultimately points out the beauty and ugliness that Charlotte aims to document. "Sometimes I'm speaking from the most despicable part of myself, sometimes I'm trying to find common cause with people who would want me dead, sometimes I'm just telling funny stories from tour,” she freely admits. While “Proving Grounds” sends an anthemic howl across the bombed out desert with “I was glad to have been sterilized / but now I’m pissing blood,” “Laughlin, NV” blares with a tweaked out country swing that only a group of fearless misfits could attain, capsized by “Every hand’s a winner / until we’re coming down / on the Colorado River / slow dancing in the loser’s lounge.” It’s like a pair of forgotten moments from Bukowski’s Ham on Rye. In fact, it was Bukowski who once wrote, "The free soul is rare, but you know when you see it - basically because you feel good, very good, when you are near or with them." If there is anything that encapsulates Roselit Bone, it must be this. Crisis Actor’s arrangements are vast and ambitious, revealing a sonic, panoramic landscape where street urchins, psychedelic vaqueros, and drunken outlaws ride painted horses through a savage, dystopian, yet ultimately hopeful, punk rock future. It’s a record of layers, revealing itself more fully with each listen. Charlotte admits, “there’s a little bit of myself in every character,” and it’s precisely those characters that bring to life the record’s vision of a broken society straight from the American underbelly, one that the sprawling seven piece outfit so vividly mimics on stage. But in the end, it’s hard not to believe that this record lies somewhere within Charlotte herself, an artist on the cusp of rebirth, one that can only be described as beautifully as “fucked.” - GET LOUD
PAST SHOWS