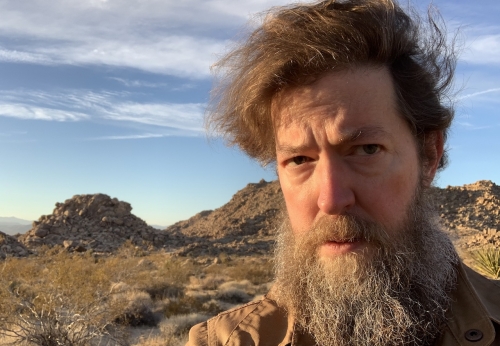 “Layne’s radio show isn’t exactly a late-night lullaby, but it’s scarily addictive. His cult following gets lost in his easy drawl for hours before they snap out of it and realize they’ve gone off the deep end.” — Roadtrippers “Best Freaky Radio Program: “Night has fallen on the American desert,” host Ken Layne says in his deep, hypnotic drawl. He lulls listeners into the quietude of the desert, then rattles them with strange and chilling tales of Bigfoot sightings, secret military UFO programs, missing hikers, and any number of myths and conspiracies involving an eclectic and eccentric cast of oddballs and experts who phone in from across the Southwest.” — Palm Springs Life “This podcast is a rare find. Ken Layne, with his gravelly, baritone voice (I would listen to him read the phone book) reports on the magical, otherworldly Mojave Desert with an approach that is equal parts subversive humor, anthropological storytelling, madcap poetry, and ecological revelation. The soundtrack is tantalizing and sets the scene perfectly, ranging from Western tumbleweed / surf rock all the way to atmospheric ambient sound. Desert Oracle Radio is consistently mesmerizing.” — Inside Podcasting “Layne cuts a singular figure. UFOs, doomed hikers, William Burroughs, singing sand dunes, Elvis, ghosts, roadrunners and rattlesnakes – the Desert Oracle packs a lot of weird, dark matter between its bright yellow covers, a cross between a guidebook and a punk zine. Created in the arid beauty of Joshua Tree in California, it has proven a cult hit devoured from Los Angeles to London.” — The Guardian “Ken Layne is a forward-thinking curmudgeon and a lover of myth, like a clear-thinking Art Bell who cares a lot about desert conservation. His voice seems to seep up from the ground, or from a Tom Waits who’s tired of rhyming. I prefer to listen to him in the dark.” — Lifehacker “Layne broadcasts out of Joshua Tree, California, fixating on all things desert. He touches on UFOs, of course, but also the peculiar goings on way, way out in the hottest middle of nowhere. If you ever find yourself driving very late at night through the emptiest of Nevada, say, or Utah, you want Desert Oracle playing on your stereo. Trippy music, Layne’s zonked-out nasal-y monotone keeping you company, and alerting you to the possibility of the unexplainable happening. Or just to the fate of Joshua trees.” — Adventure Journal “The desert is a powerful cocktail of breathtaking beauty, brutality, and mystery. Layne serves it straight-up. . . Reading this book is like swapping tales around the campfire under a star-filled sky.” — Booklist “Ken Layne’s writing shows us that human nature is its own wild thing, sprung from the same source as forests and deserts and oceans, and every bit as unruly.” — Los Angeles Review of Books “Desert scribe and radio personality Ken Layne is the editor of Desert Oracle, a pocket-sized field guide to the American Southwest, and the host of Desert Oracle Radio — a weekly late-night broadcast out of Joshua Tree. With synthesist RedBlueBlackSilver in tow, Layne offers up tales of the paranormal, the odd, and the arcane. Layne illuminates these damned and or transcendent topics with good humor and dusty charm.” — Aquarium Drunkard Transmissions Ken Layne is creator and host of Desert Oracle Radio, the cult-hit broadcast/podcast that airs on more than a dozen terrestrial stations. Since 2017, he has performed Desert Oracle Campfire Stories at the Ace Hotel & Swim Club in Palm Springs, along with occasional live broadcasts of his late-night radio program around the Southwest. A new live version of the show premiered to sold-out audiences in Twentynine Palms in July, and it is this trippy mix of sound, vision & performance that’s going on the road. Layne is publisher and editor of Desert Oracle, the pocket-sized field guide to the mysterious American deserts, and author of the hardcover Desert Oracle Vol. 1, published in December 2020 by MCD/Farrar, Straus and Giroux, with the paperback coming in December 2021 from Picador. His fiction appears in the desert-crime collection Palm Springs Noir, newly published by Akashic Books, and he is the author of the Mojave Desert utopian novel Dignity.
SIMILAR ARTISTS