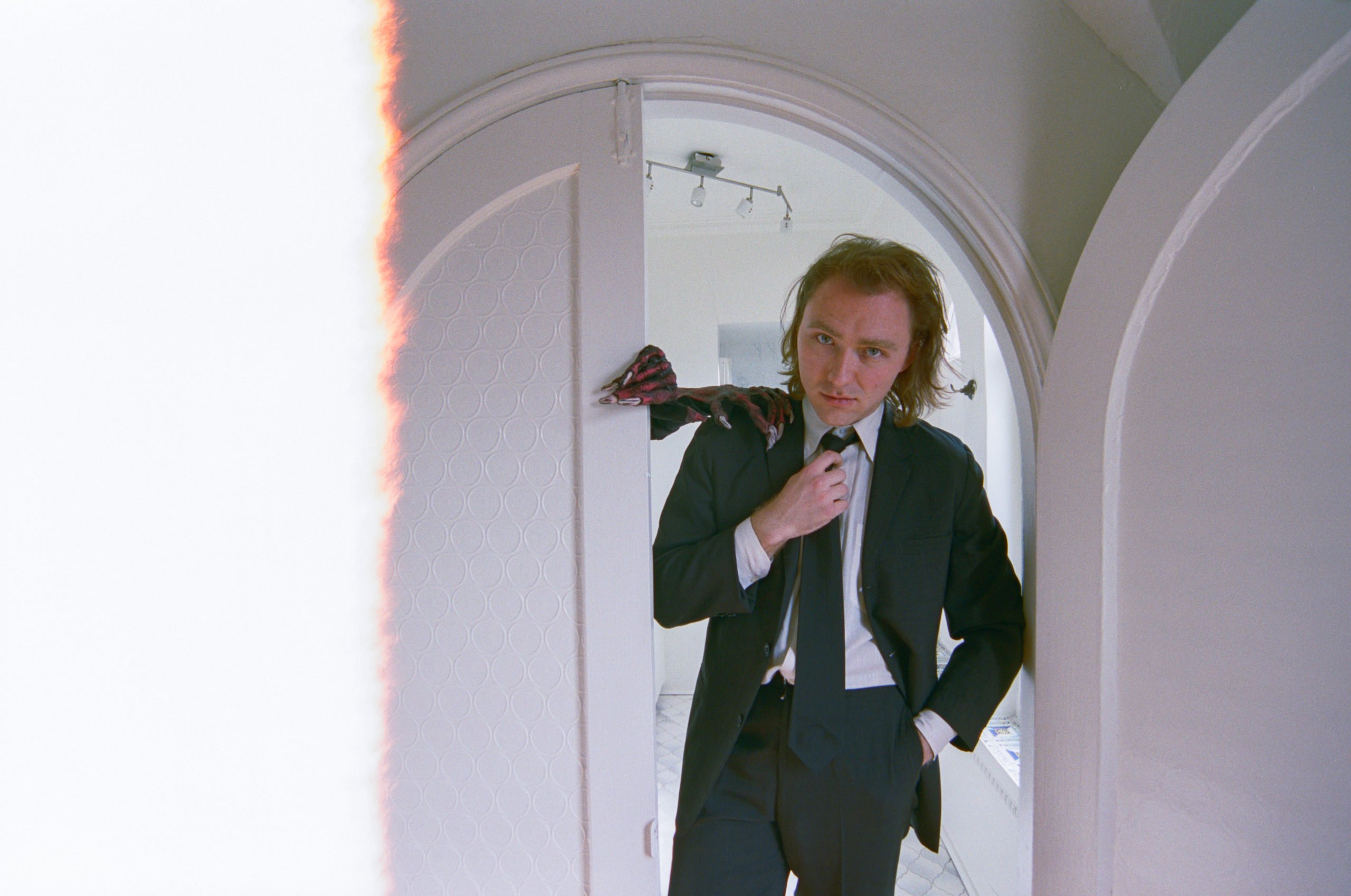 To listen to a Current Joys song is to be immersed fully in Nick Rattigan’s world. An avid consumer of cinema, a visual artist as much as he is a musician, Rattigan’s music is tactile, its imagery and sonics conceived simultaneously. It’s unclear where the films Rattigan is inspired by stop and his personal life starts, but the blending is what makes Voyager so remarkable. Voyager, the seventh LP from Current Joys, rattles with the live-wire feeling that’s thrummed through all of Rattigan’s previous releases: a quavering, scream-itself-hoarse vocals and self-in-terrogation via song. But here, that bristling, sentimental rock‘n’roll cacophony is overlaid with a soundtrack orchestra guiding it along. It’s an odyssey, a grand-sounding journey of self-discovery spread across sixteen tracks. Part ekphrasis, part personal, it’s Rattigan learning new ways to understand his own feelings and identity while inspired by the highly-stylized, striking storytelling of filmmakers like Alfred Hitchcock, Lars Von Trier, Terrence Malick, Agnès Varda, and Andrei Tarkovsky. Voyager is unlike anything Current Joys has released before. On his new LP, Rattigan eschews lo-fi home recordings for a full band and recording sessions at Stinson Beach Studios. As a vocalist/drummer in his other band Surf Curse, Rattigan had finally opened up to the possibility of working in a professional studio: “I’d just been very stubborn in wanting to do it all my own way, but I guess I’ve kind of opened up the creative process to more people at this point,” Rattigan explains. “ And I think it yields better results.” Since 2013 Current Joys’ output has been prolific. A Nevada native, Rattigan began Current Joys in Reno, before moving to New York after school and busting his ass working as a production assistant in the film/TV industry. He’d play Current Joys shows to dismal audiences around New York, and found himself increasingly drawn to Los Angeles’ scene instead. He relocated to LA in 2016, and the songs that make up Voyager began coming together shortly after. Each piece of Current Joys’ previous discography is wholly built and envisioned by Rattigan, self-recorded and quickly released, quivering with a lonely intensity. Within six months of beginning the project, Current Joys had already released its debut, Wild Heart; by 2018, the sixth Current Joys full length and visual album, A Different Age, was out. All the while, Current Joys’ profile quickly and quietly ascended, selling out venues like LA’s El Rey along with European tours, simultaneously amassing millions of streams of the catalog, and a dedicated following. But while the audiences and songwriting/recording approaches changed and continue to evolve for Current Joys, the inspiration Rattigan draws from cinema remains a guiding force. “Something that naturally sort of happened was watching movies and being inspired by them so writing a song about the content of that movie,” Rattigan explains. “But it started to influence me more spiritually when I went to this double feature of Tarkovsky. They were showing The Mirror and Nostalgia at the New Beverly, and just watching those movies made me realize how there’s different ways to communicate music, or communicate art. Obviously with Tarkovsky it’s in a very surreal but spiritual and intense form, and I tried sort of mimicking that feeling into music instead of visuals. I started reading directors’ autobiographies—I’ve always taken way more from what directors do vs. what other musicians do.” Frequently he uses film as a jumping off point for songwriting. “Big Star” was written on tour after watching Adventureland, hoping to capture that specific endless youth energy of the soundtrack’s Replacements and Big Star songs. “Amateur” is piano-heavy, a slow-build of tension, flitting with prettiness, while the creeping “Rebecca,” named after the Hitchcock film before Rattigan had actually seen it, radiates a haunted, sinister presence; “Naked” feels almost unhinged, while “American Honey” is a longing, mellowed lament. The title track, “Voyager pt. 2,” holds a sparse, near-funereal starkness, as well as the album’s thesis: I’m a voyager in my mind, before the Spielberg-esque strings swell. Somehow, the amalgamation of tone fits. Rattigan, who stays up all night to perfect the sequencing of his records once they’re recorded, doesn’t set out with a typical aesthetic in mind – instead, it just happens. Performing is his catharsis. Which feels palpable on Voyager; there’s fragments of hours spent watching movies, as well as stories from his own life; there’s overly-caffeinated car rides blasting the Pixies’ Surfer Rosa; there’s inspiration taken from the crooning presence of frontmen like Jeff Buckley, Chris Isaak, and Nick Cave, as evidenced on Rattigan’s cover of the Boys Next Door’s “Shivers.” And there’s the simple, ecstatic energy of getting a bunch of friends in the studio. It’s all held together by the fervor of Rattigan’s creative process. He believes in the premonitory power of music, and he latches onto the song ideas that strike him in the moment, propelled by an abstract existentialism or burst of feeling more than anything else. It imbues Voyager with an intensity and intimacy – with the sense that you’re getting to hear, all at once, the disparate parts that make a project – or person – into a sprawling, cinematic whole.
PAST SHOWS