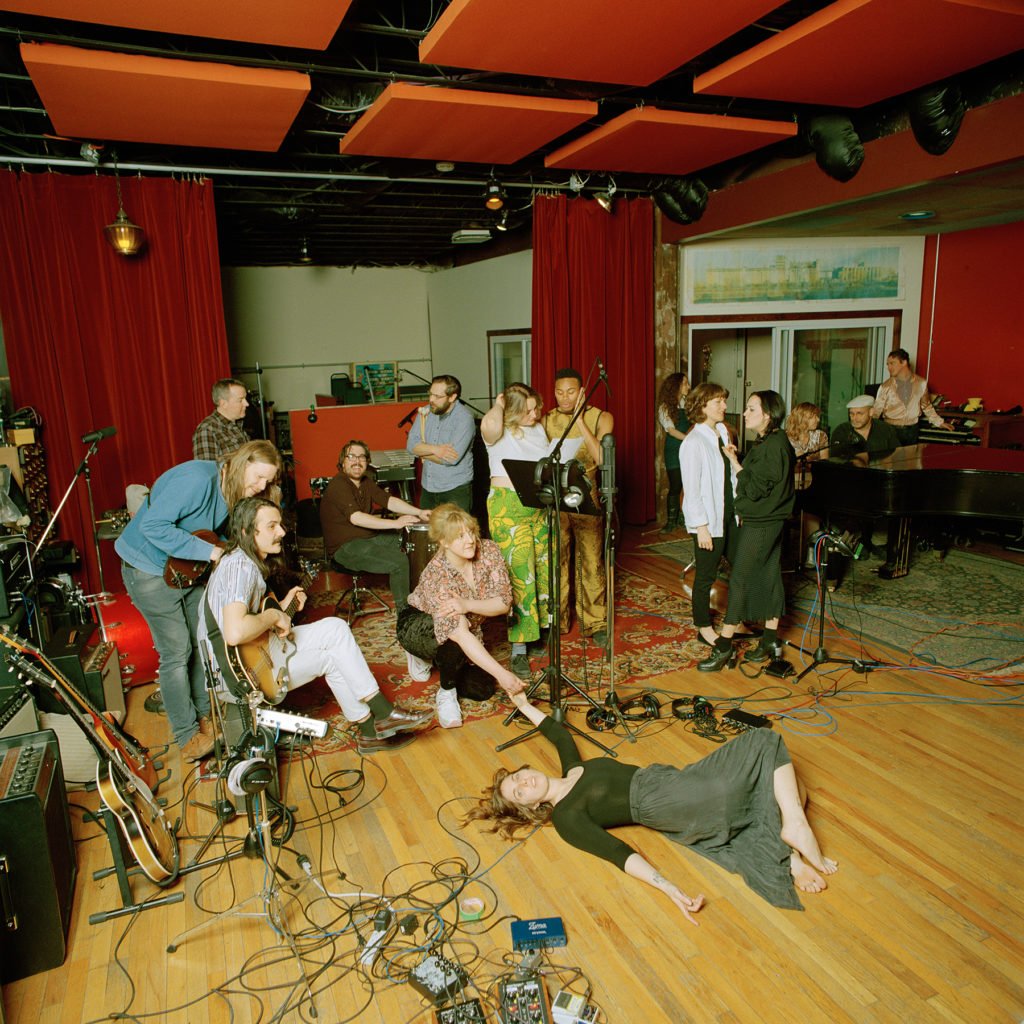 10 years ago Meg Remy released “Red Ford Radio”, a haunted AM radio transmission taken from her sophomore album as U.S. Girls. Its stark arrangement is comprised of two elements -a hypnotic, chant-like vocal cast against a reverb-doused drum machine. Rhythm and voice; a beat, and a story. While Remy’s subsequent album works have been marked by increasingly colourful adornments, this elemental dynamic has remained at the core of her work. It’s little surprise then, that Remy has returned to this early mastery of form, capping a decade of U.S. Girls and closing Heavy Light, her latest album for 4AD, with a newly captured version of “Red Ford Radio.”Recorded live atMontreal’s acclaimed studioHotel 2 Tangoand featuring 20 odd session musicians, HeavyLightis an architectural achievement for an artist whosecareer began with a 4 track tape recorderand a Greyhound bus pass. Following the subversive sheen of 2018’s In A Poem Unlimited, Remy has taken a deeply introspective about-face to produce a set of mindful compositions on hindsight, the passage of time, the delicate balance of the conscious and the unconscious, and the pursuit of a radical empathy. The album was written and recorded while Remy was still touring her formidable U.S. Girls Poemband, incinerating stages with an anachronistic blend of politicized disco pop and aggressive, theatrical improvisation. In counterbalance to this energy, she worked with co-writers Basia Bulat and Rich Morel to develop the core of Heavy Light, a set of songsconceived as a richly arranged balance between orchestral percussion (as arranged by percussionist Ed Squires) and the human voice. In studio, group harmony vocals were undertaken by a cast of diverse singers (conducted by Kritty Uranowski) who lent not only their voices, but also shared reflections on childhood experience. These memories were prompted by Remy in recorded interviews she later collaged into moving spoken word interludes, stitching together the record’s thematic tapestry. The songs themselves provide a sonic departure from those featured on Poem. With arrangements collaboratively spearheaded, the production features no trap kit drums, but a cornucopia of acoustic frequency from vibes, marimbas, piano and upright bass. The resulting album finds Remy casting herself as lead voice among a harmonious multitude, as on album opener “4 American Dollars”, an update of U.S. Girls patented blend of politic and disco beat (and as close as Heavy Lightcomes to revisiting Poem). More often the artist’sdistinctive vibrato is foregrounded against delicately lush configurations such as on “IOU”-a ballad which tackles complex notions of consent by positing “you didn’t choose to be born / and I’ve never heard of anyone who has / I’ve never known no baby with a plan / for how to survive.”While Remy has been widely acclaimed for a panoply of closely observed character studies, on Heavy Lightshe turns inward, recounting personal narratives with a curious retrospection. The album is perhaps best understood as an inquest into the melancholy flavour of hindsight, both personal and cultural. Remy makes this notion formally explicit with the inclusion of re-worked, previously released songs “Overtime”, “Statehouse (It’s A Man’s World)”, and the aforementioned “Red Ford Radio.”The scope of hindsight ranges on Heavy Lightbetween the personal on “Woodstock ’99”(where we find the singer contrasting her experience of the titular event to that of a friend’s) to the planetary on “The Quiver To The Bomb”(which illustrates the geological blink of an eye containing human development). The genesis of U.S. Girls itself is revisited in the form of formative touchstone Bruce Springsteen, whosecurrent E Street Band saxophonist Jake Clemons detonates a solo over impassioned lead single “Overtime.”The theme of finality confronted in hindsight also seemed to haunt the mix process where long-timecollaborators Maximilian ‘Twig’ Turnbull, Steve Chahley and Tony Price confronted the limitations of a live tracked album. Their approachto post-production allowed the bleed between elements to become a central component, while resisting the urge to touch up live cut vocals. In
honouring the finality of choices made at the recording dates (largely self-produced by Remy), the humane character of the results spill forth, as un-automated and reflective as human thought. “A faith like an axe. As heavy, as light”, proffers the aphorism by Franz Kafka which U.S. Girls’ new album eloquently evokes in title. This notion of an ambiguous, ever-shifting duality pervades Heavy Light. Grief is a mercurial weight, at times uncontainable and universal. Other times, it is small enough for us to dance with, stowed safely in our back pocket. At all times it is worthy of reflection, perhaps keenly so in our present moment. As Remy suggests with this remarkable new album, hindsight is now. Hindsight is 2020. 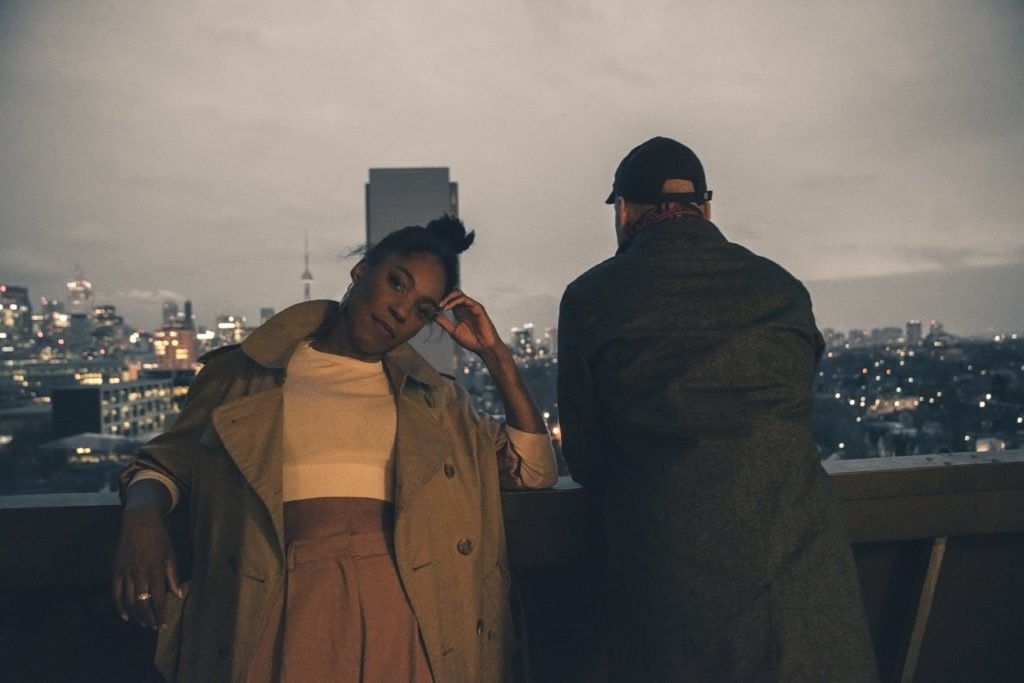 Dancehall-bred. Orchestrated like old soul. Driven by emotive vocals inspired as much by Feist as by Yolanda Adams. There’s a rawness to Bonjay: to the feelings, to the voice, to the sounds clashing. It sounds like something new.

Bonjay is Alanna Stuart and Ian Swain of Toronto. Their debut Broughtupsy EP established them with praise from Dazed, The New York Times and The Guardian.

This is not background music. From the first coo to the last wayward blip, it demands your full attention.